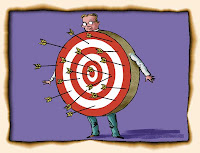 I don't understand how anyone can listen to this Dec. 8 "Fresh Air" interview with Washington Post reporter Karen Tumulty, who's been covering Newt Gingrich for years, without concluding that his nomination would be the greatest gift to an opponent's ad writers in the history of politics. He tried to pocket a $4.5 million book advance while in office. He was fined $300,000 by the House for ethics violations. He took millions from Freddie Mac, whose executives were sued today by the SEC. He shut down the federal government while trying to cut Medicare and said it was because President Clinton didn't let him ride up front on Air Force One. Whether it's technically lobbying or not, he's cashed in on his access to fellow politicians. Former allies and intimates say he has political ADD, flitting from one half-baked idea and policy crusade to the next. His own people tried to oust him as Speaker. He resigned before being driven from office.

Gingrich and his team have explanations and excuses for every allegation. Tumulty says the IRS repudiated the House Ethics Committee finding that resulted in his fine, for instance. But attack ads don't have footnotes. Besides, there's just too much here. Incumbent presidents seeking reelection, Obama included, don't have half this much baggage. As they spent their advertising millions, the Obama team and its associated PACs might not even get around to his personal life or outrageous policy statements such as comparing Muslims to Nazis (which Gingrich's former House colleague Joe Scarbourgh called hate speech), flip-flopping on the Libya intervention, or saying Palestinians are a manufactured people.

Tumulty says, "Newt Gingrich views himself as a historic and even transformational figure." And that he was, an historical 17 years ago. She credits him with the destruction of the career of former Speaker Jim Wright (over his own book deal) and the astonishing GOP takeover of the House in 1994 and passage of the Contract with America, which died in the Senate. But since then he's been a gadfly, and so too for almost all of the run-up to the 2012 caucuses and primaries. His surge occurred after no one else -- neither Palin, Trump, Bachmann, Perry, nor Cain -- got up a head of foam as the tea party's desperately yearned-for un-Romney. Gingrich isn't transformational anymore. For those desperate to prevent a center-right realignment of the GOP, he's just the best of what's left.
By Fr. John at 4:10 PM