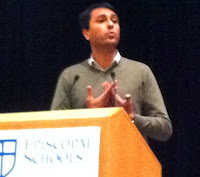 Eboo Patel, a 35-year-old social scientist and interfaith leader, is smooth, articulate, and, as a regular commentator on CNN and NPR, media savvy. And yet speaking this morning to 650 Episcopal educators gathered at a National Assn. of Episcopal Schools conference in San Antonio, he twice came close to losing his composure.

He almost choked up describing the day he ran into his old principal, nearly 20 years after being graduated from Glenbard South High School in Glen Ellyn, Illinois. To remind a breakfast plenary session full of teachers of their influence in young lives, he said he still remembered seeing Mr. Abrazo standing in the same spot in the hallway every day between classes and helping him form a new campus organization that others on campus had discouraged.

The second moment -- and here Patel evinced sheer astonishment -- was his description of how it felt last summer when Newt Gingrich, a former speaker of the House of Representatives, history professor, and putative authority on American values, compared him to a Nazi. Patel reminded us that in 1790, President George Washington had promised the Jews of Newport, Rhode Island that the U.S. government would give "to bigotry no sanction, to persecution no assistance." But that kind of woolly-headed thinking went out the window once Gingrich and certain other Republicans discerned that political profit could be gained by scapegoating Muslims such as Patel and his family for the Sept. 11 attacks and by stoking an anxious

During what Patel called our summer of intolerance over whether a Muslim cultural center should be built in lower Manhattan, his mother called and asked whether it might've been better for him and his wife to have given their children less Muslim-sounding names. That way, she was suggesting, they'd be safer.

A sad turn for an American family, brought about by their fellow Americans. "I was tempted to ask her, 'So why did you name me Eboo?'," he said. We Episcopalians laughed with relief. But our keynote speaker didn't let us off the hook. He said our diminutive denomination of churches and schools -- noted for its tolerance of ambiguity and, especially in our schools, promotion of religious pluralism in chapel and religion classes -- is destined to play a central role if our nation's complex religious mix is ever to become less flammable. "We're the most religiously diverse nation in history and the most devout in the West," he said, "living in a time of global religious conflict." Our diversity will only lead to a heightened sense of spiritual communion, he said, if we reacquire some religious and interfaith literacy, learn to talk about our shared religious values, and get to know one one another as individuals instead of stereotypes.

Instead, according to a recent study, a significant percentage of incoming Boston College students couldn't name the four gospels, identify Mother Teresa's denomination, or correctly associate the Koran with Islam. At the same time, Patel said, "the only ones who are willing to speak out out about religion in America are the ones who are comparing Muslims to Nazis." They, of course, as well as the neoatheists, who deftly throw us religious moderates out with the fundamentalist brimstone. Patel said that Episcopalians "are just about in the best place" to promote interfaith encounters based on the acceptance of God's heart for mercy, justice, righteousness, and love -- but to do so, our church will have to stop wringing our hands and start ringing our bell. Essentially, our speaker was calling us to re-embrace our Anglican heritage of prophetic pragmatism, loudly and proudly.
By Fr. John at 11:29 AM