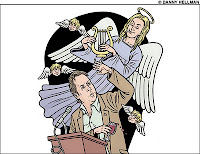 Suck it up, Christopher, says Eric Reitan. Celestial bliss awaits whether you like it or not:

I cannot agree with a statement made earlier today by Douglas Wilson—Hitchens’ conservative Christian debating partner and friend—in his otherwise sympathetic reflection on Hitchens in Christianity Today. “We have no indication,” Wilson writes, “that Christopher ever called on the Lord before he died, and if he did not, then Scriptures plainly teach that he is lost forever.”

Against this invocation of conservative dogma I cannot help but juxtapose the words of an earlier iconoclastic writer, the French mystic and philosopher Simone Weil: “…one can never wrestle enough with God if one does so out of pure regard for the truth. Christ likes us to prefer truth to him because, before being Christ, he is truth. If one turns aside from him to go towards the truth, one will not go far before falling into his arms.”

Those who, like Hitchens, are devoted to the true and the good are, by implication, oriented towards anything that could rightly be called God. And so, if there is a deity waiting on the other side of death, I cannot but believe that Hitchens is even now stumbling in surprised wonder into those arms.