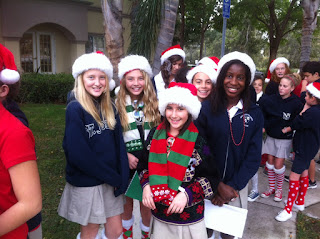 The St. John's Middle School choir was due at a local retirement community for their annual Christmas concert. The young people, hoofing it from our campus a half-mile away, got a late start because of the chilly, changeable weather.

I arrived early and sat in the lobby as concertgoers gathered. "It was supposed to start at 9:30," one resident said. Her friend replied knowingly, "It was moved to 10." Looking at her watch, someone else said, "It's 10 now." One of the first two wondered whether the performance would interfere with lunch. Older people often get up and eat and go to bed earlier, but I still thought it would be okay.

The double doors burst open, and the red-cheeked Cardinals soared in. The choir was introduced by Mrs. Bonhall and conducted by Mrs. Speciale, who sounding each song's starting pitch in her pellucid soprano. They sang ten numbers, including "Hark! The Herald Angels Sing," "Deck The Halls," and "Jingle Bell Rock." Residents smiled, sang, and clapped. As would have happened if Pavarotti or any temperamental genius had been a half-hour late for a recital, memories of the brief delay were borne away on angel voices.

During "Rudolph," as I took pictures, a woman tapped me on the shoulder and pointed. One chorister had donned a red nose that was blinking in time with the music. I thanked the woman with a smile. She winked. It's beginning to look a lot like Christmas.
By Fr. John at 3:01 PM