"Godspell" And The Judas Paradox 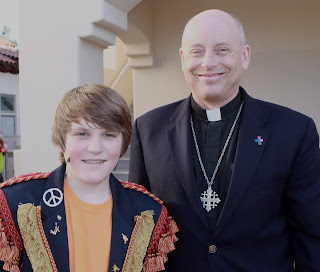 When Christopher Lanham, now a St. John's eighth grader, was five or six, his father, Randall, a diligent Bible student, told him that Jesus's death enabled the salvation of the world at the first Easter.

Wouldn't that mean, Christopher replied, that Judas was a good guy?

Christopher was doing the kind of exegesis you don't normally encounter in kindergarten. Second century theologians grappling with the same paradox produced the revisionist, non-canonical gospel of Judas, in which the great betrayer is portra 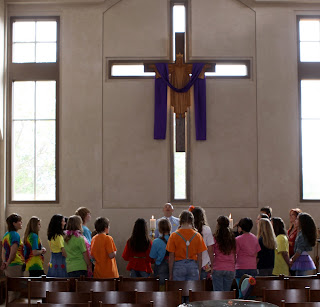 yed as Jesus's co-conspirator. Christopher solved the riddle his own way early this month in the St. John's Middle School production of "Godspell," in which he portrayed both John the Baptist, who was present at the beginning of Jesus's public ministry, and Judas, who helps bring it to an end.

My thanks to Christopher's mother, Kristen Welles Lanham, who helped the cast and crew get ready for their performances and also graciously sent me the photo of Christopher and me as well as of the Holy Eucharist the cast, crew, and I celebrated a couple of hours before the April 7 premiere. We used the propers for the Rev. Dr. Martin Luther King, whose musical cadences opened the hearts of his congregations and audiences to the possibility of a better world. Our young people did the same with their song, dance, and acting. As I wrote to the people of St. John's in our annual Easter letter:

The players’ energy had their audiences grinning, and the rousing tunes had our toes tapping. But the end was all too familiar. The world rejected the s

on of God. His followers couldn’t stay awake with him, even for an hour. The Cross.

Thankfully, the kids (including Jesus) rushed back in for their last number and curtain calls. The music swelled, and the audience, at all four shows, responded with standing ovations. The cast and crew had worked long hours,

after school and on weekends, to get ready. Their faces glowed with pride at a job well done. Having just reenacted the moment when humanity failed God, they brimmed with hope and possibility, promise and love. It reminded me of the feeling I get every Easter, bathed in the forgiving light of the empty tomb.

In the audience at the closing performance on April 10 was our St. John's Easter miracle herself, seven-year-old Emma Williams (left), who saw the show with a friend.
By Fr. John at 4:49 PM