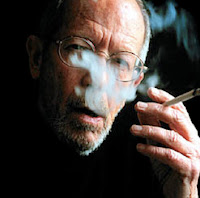 While Kathy and I were in Detroit, Metro Times, its alternative weekly, published a great Q&A with crime novelist and Detroiter Elmore Leonard. The on-line version doesn't include his "ten (plus one) rules for writing in brief":

1. Never open a book with the weather. 2. Avoid prologues: They can be annoying, especially a prologue following an introduction that comes after a foreward. 3. Never use an adverb to modify the verb "said"...he admonished gravely. 4. Never use a very other than "said" to carry dialogue. 5. Keep your exclamation marks under control. 6. Never use the words "suddenly" or "all hell broke loose." 7. Use regional dialogue, patois, sparingly. 8. Avoid detailed descriptions of characters, which Steinbeck covered. 9. Don't go into great detail describing places and things, unless you're Margaret Atwood and can paint scenes with language. 10. Try to leave out the parts that readers tend to skip.

My post important rule is one that sums up the ten: If it sounds like writing, I rewrite it.