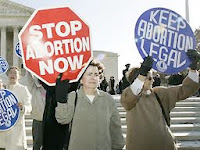 Nicholas Kristof, reflecting on Democratic and Republican cowardice and incompetence (his words) leading up to last week's near-shutdown of the federal government:

In the United States, publicly financed family planning prevented 1.94 million unwanted pregnancies in 2006, according to the Guttmacher Institute, which studies reproductive health. The result of those averted pregnancies was 810,000 fewer abortions, the institute said.

Publicly financed contraception pays for itself, by reducing money spent through Medicaid on childbirth and child care. Guttmacher found that every $1 invested in family planning saved taxpayers $3.74.

As for international family planning, the Guttmacher Institute calculates that a 15 percent decline in spending there would mean 1.9 million more unwanted pregnancies, 800,000 more abortions and 5,000 more maternal deaths.

So when some lawmakers preen their anti-abortion feathers but take steps that would result in more abortions and more women dying in childbirth, that’s not governance, that’s hypocrisy.