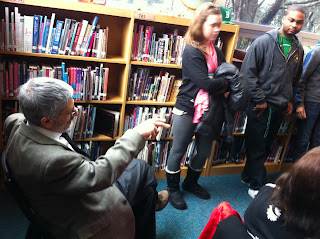 The Rev. Dr. Roger Ferlo, born into a working class Roman Catholic family in upstate New York, was ordained an Episcopal priest 25 years ago. Theologian, writer, seminary dean and professor, and cellist, he has devoted considerable energy over the last 15 years to the National Assn. of Episcopal Schools. At NAES's quarterly governing board meeting this week in Portland, Oregon, he stepped down as board member and president. The good work of our busy two-day meeting notwithstanding, many of Roger's colleagues said they feared having to get along without his erudition and gracious, priestly presence.

And shrewd tactical instincts, because there's politics everywhere, even in the church and especially at hundreds of Episcopal schools that work in sometimes uneasy collaboration with parishes. Imagine what can happen when two institutions, shepherded by strong-willed school heads and priests doing the seemingly divergent work of teaching children and ministering to aging congregations, have to share leadership, finances, and real estate. Priests at parishes with schools sometimes complain that heads get all the attention, heads that priests just don't get schools.

Tensions seemed to escalate as the church lost members while schools grew, though in recent years enrollment has leveled off. Amid change and crisis, our Episcopal-Anglican values, which

teach us to live with ambiguity, haven't always been enough to help testy neighbors manage their differences. If our experience at St. John's Episcopal Church and School is any guide, a successful confederation makes for a lively, diverse, worshipful community. But some on both sides of the fence say that Episcopal schools can only really thrive when they achieve independence from parishes.

Church-school disharmony also echoes society's prevailing incivility and household discord. Like all pastors, I've counseled angry, discouraged spouses. As a school vicar and religion teacher, I've noticed that while lessons about church doctrine can leave students cold, a unit on Cain and Abel gets the attention of anyone with an annoying sibling (and what sibling doesn't have one?). Bickering and divorce have become societal norms; schism remains an all-too-common ecclesiastical one. Going against the grain takes patience and grit. No matter what his personal views are

on the inevitability of school independence, Roger Ferlo, among others at NAES, models a coequal passion for parish and school ministry that encourages optimists in their faith in the creative coexistence between our fractious Episcopal relations.

Perhaps the children will lead us yet again. Portland's Oregon Episcopal School, where Roger and Anne's daughter, Liz Harlan-Ferlo, is high school chaplain and a member of the religion faculty, hosted the NAES board on Thursday. I had a chance to ask some students what they said when non-OES friends wondered what "Episcopal" meant. Their answers demonstrated an instinctual grasp of contemporary Anglican theology. One student said our church has to do with community; another said it's all about service. Maybe building stronger households and communities through the habit of mutual servanthood can help keep our families together amid the inevitable disturbances of our common lives -- husbands, wives, partners, siblings, even schools and churches.
By Fr. John at 11:30 AM

Great post with broad implications. Loved the part about siblings. Much as Eva and I loved each other (as twins, we were one to to speak) we did occasionally squabble. She even broke a plastic brush over my head once when we were kids (I think Maarja Miss Smartypants probably deserved it)! Seriously, thanks for putting this one up. Brightened up my rainy day in the DC area although the flowering trees are gorgeous. (Just got back from a neighborhood walk -- Maarja and Tears for Fears! -- where I admired the redbud, dogwood, tulips and early azalea).

Thanks, MK. I find I can teach a lot of theology and gospel living by keeping the kids focused on sibling rivalry!