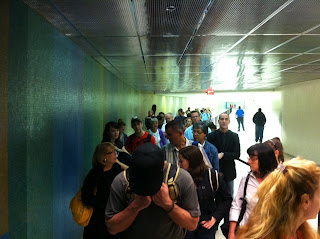 As Kathy and I drove to LAX yesterday morning, we heard on the radio that Delta Airlines is ranked lowest in customer satisfaction. The scene at left may be one reason why. Passengers who don't pay a high annual fee for special security privileges are herded down a long, dark tunnel and funneled through two checkpoints. It took us a half hour on Monday morning. In January, I spent an hour and a half in the line while my fellow Holy Land pilgrims worried that I'd been waylaid or had gotten sick. I couldn't call them, because cell phones don't work on Delta's long underground march.

Our January experience exposed an inconsistency in Delta's methods. We can debate giving speed passes to frequent fliers and others who are willing to pay. My heart says that homeland security should be equally annoying for all. But I can also understand the value of getting the frequently flying engineers of our sputtering economic engine to their vital job- and wealth-creating work as painlessly as possible.

But Delta LAX doesn't play by its own rules. In January, I was the last through security because I wanted to make sure my 27 fellow pilgrims were on their way to the gate first. Few if any were so-called priority passengers, but most were sent through the priority line anyway. I'm glad they were spared the privations of the Styx Delta. But it means that the policy is sometimes to distribute the masses equally among all available lines and other times to honor the division between priority travelers and the rest of humanity. Better one policy or the other than both at the same time.

And a better airport, please. Part of Delta's problem is a generation-old physical plant. LAX has poor parking, makeshift security areas, and grubby-looking restrooms. Pretty embarrassing when you think of folks flying in from gleaming airports in Tokyo, Beijing, and Detroit.
By Fr. John at 6:15 AM