The Donald Should Lose The Girls 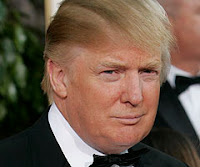 “Did you get the info I sent you?” Mr. Trump asked in a phone interview with The New York Times late last week. “I told the girls to send you the ratings.”

When I was working for Richard Nixon in New York and New Jersey in the 1980s, he sometimes resorted to saying he'd asked "the girl" to do something. So too his ex-advance man and aide Nick Ruwe. Guys of their generation sometimes talked that way. In the 21st century, Donald, not so much.
By Fr. John at 8:00 PM