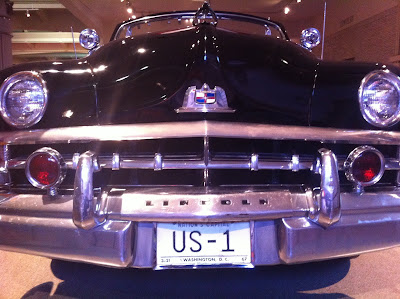 On display at the Ford Museum in Dearborn, Michigan, the "bubble top" limousine used by FDR, Truman, and Eisenhower and briefly by Kennedy 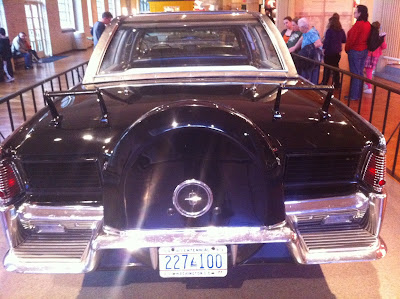 The car in which President Kennedy lost his life; also used by Johnson, Nixon, Ford, and Carter 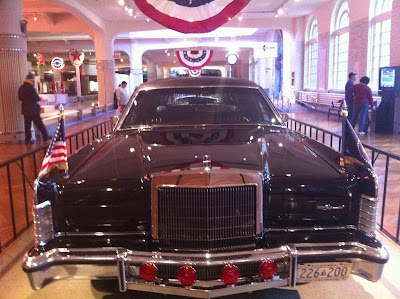 President Reagan was about to step into this car at the moment of the 1981 attempt on his life, when a bullet struck him after ricocheting off the armor plating on the side; previously used by Ford and Carter
By Fr. John at 8:46 PM

Dang, does that mean that the rocking chair in which Lincoln sat when shot and the Kennedy assassination car are both in the same private institution? Good thing Henry Ford et al didn't get their hands on the Shroud of Turin!

I hope to blog about this, Juan, but the Ford Museum also outbid the Smithsonian and two other institutions for Rosa Parks' bus. On Wednesday, I sat in the seat she was asked to leave.

Not too long ago, the Lincoln chair was re-upholstered, presumably because the original cloth was stained and torn. Who would have thunk?

A friend from Detroit told me that when he saw the chair as a child (mid-60's)they allowed kids to touch it. Hopefully, not sit and rock on it too. It's a shame it's not in Ford's Theater.