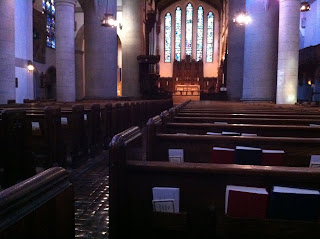 On an Easter Sunday about 45 years ago, our little family was a little late for services at the Cathedral Church of St. Paul in Detroit. We found seats in a pew near the back, on the right near the aisle. The congregation was half a verse into "Jesus Christ Is Risen Today." As we reached for our hymnals, my English-born grandmother, Lily Sharley, sighed with pleasure and said, "I'm so glad we got here in time to sing this." It was a powerful moment for me, fixed in my memory and dreams; and this pew looks about right.

Kathy and I visited the cathedral Tuesday afternoon after I'd given a speech in nearby Dearborn to 300 funeral home managers. I received the invitation thanks to my musical buddy Gary "Boom" Baker, whom I've known since he assisted with President and Mrs. Nixon's funerals, which I oversaw in 1994 and 1993 as director of the Nixon library. Gary's now an execu

tive of SCI, owner of over 2,000 funeral homes and cemeteries.

The funeral business is worried about losing customers, the mainline church about losing congregants. One brand-new solution we fixed on is good, old pastorship. The two keynoters at the SCI conference, celebrant trainer Glenda Stansbury and I, found ourselves in a degree of friendly opposition. She travels around the country training laypeople and the occasional atheist to celebrate and preach at funerals because, these days, many family member of decedents distrust the church, don't believe in God, or just assume we'll do a poor job. In my remarks, I said the church had better not be too willing to cede that ground.

Our hosts asked me to tell Kathy's and my Nixon funeral stories (you try getting Henry Kissinger to stay within five minutes for a eulogy sometime, plus there was that moment with G. Gordon Liddy) before talking about funeral ministry. It was a chance to really unwind, since they gave me an hour and 15 minutes (which will alarm the people of St. John's). As Episcopalians will, I mentioned the priesthood conferred on all Christians by baptism. Arriving at St. Paul's on Woodward Ave. a few hours later (not far from the Fox Theater, where my homey Eminem arrived in that fine new Chrysler in his Super Bowl ad), Kathy and I were warmly greeted by a genial man on his way to the parking lot. I announced a little boisterously that on April 1 I'd celebrated the 50th anniversary of my baptism at St. Paul's. He replied that he was the Very Rev. Scott Hunter, installed as dean of St. Paul's four years ago, also on April 1. Couple of April Fools for Christ, the dean and I.
By Fr. John at 7:00 AM

Maybe it's my Jewish roots showing, but I dislike the concept of a funeral taking place two or three days after the death of the loved one. I prefer the idea of a quick burial and then a memorial service 30 days or so thereafter. Sitting shiva makes so much more sense. The idea of holing up at home for a week before having to put on the game face for decorum's sake is alot healthier, I believe. Sorry if this was a bit morbid.

Not morbid at all, Juan; much appreciated. My hosts in Detroit are grappling with a nightmare scenario in which more and more people seem determined to avoid any ceremonial piece at all, confining their funeral service need to (as harsh as it may sound) removal and disposal, usually through cremation. Obviously the industry has some more products and services that it wants to continue to provide, but the question is also how it can do better, be more pastoral, in the way it puts those pieces together for families.

As people turn away from involving the church in their ritual observances or from having any ritual at all, you can see how the church's interests run parallel. People are of course entitled to the sendoff they want. But I don't want people turning away from the church just because they've been to too many funerals where the church has done a poor job.