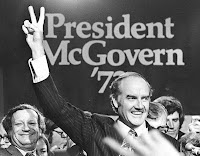 Robert Slayton teaches history at Chapman University in Orange County, where he holds the Henry Salvatori chair, named for a famous conservative activist and philanthropist. Yet Slayton is still carrying a torch for George McGovern's true believer's campaign against Richard Nixon in 1972 -- and warning tea partiers against make the same mistakes:

The senator from South Dakota may have been true to the values I and others shared, but he was out of step with what the majority of Americans believed, and what they wanted the future to look like. Not just our faction, but fifty-one percent or more. He extolled our principles powerfully, but did not match up with those held by the bulk of American voters. McGovern could win primaries where a minority held sway, but not a general election.

The Tea Party segment of the Republican Party may be heading in the same direction, to a similar result of short-term victory and larger defeat.

Very interesting, thanks for posting the link. Slayton makes some good points about insularity and arrogance. If you look at the anti-war car bumper in the post you put up earlier, there's a second sign which reads, "Wag more, bark less." Having recently compared some elements of the angry anti-Nixon left to the angry anti-Obama right in own of my essays, that one caught my eye.

In addition to what Slayton points out, I would add that it is critical not to sound as if you believe in one party rule and that all opposing ideas must be crushed. This is where the angry talk radio right really hurts some of the ordinary people who may be fiscal or social conservatives. If we so demonize the other side as to suggest its adherents have no right to prevail on public policy at the ballot box, then we're not the real USA any longer. We need more salesmen and fewer litigators. (I just discussed that in a post in an historian's forum, where a conservative lawyer has used ad hominmens in many of his posted comments.) Yes, it's the man who referred to me as a curator of urinating cats.

Talk radio is terrible in that regard. Rarely do I see anyone give off a vibe of "I could be wrong, I'm just human," or, as Bill Clinton and Dwight Eisenhower have said, "they look at things differently," without implying they are "enemies." Yet they could achieve so much more and get more centrists and Independents to listen to them, if there displayed less fist pounding anger. It's sad to see such poor salesmanship, which doesn't serve conservatism (which has principles that could be sold better) very well. Knowing from my faith and my work experiences that man is weak, I would never want to work for a boss or to give power to someone as motivated by anger as some of the cable and talk radio opionators seem to be.

In looking up something, I found a great quote from Robert Bolt's A Man for Seasons, which offers a cautionary tale. It applies to how I look at archival issues but also to some others, as well.

“William Roper: So, now you give the Devil the benefit of law!
Sir Thomas More: Yes! What would you do? Cut a great road through the law to get after the Devil?
William Roper: Yes, I'd cut down every law in England to do that!
Sir Thomas More: Oh? And when the last law was down, and the Devil turned 'round on you, where would you hide, Roper, the laws all being flat? This country is planted thick with laws, from coast to coast, Man's laws, not God's! And if you cut them down, and you're just the man to do it, do you really think you could stand upright in the winds that would blow then? Yes, I'd give the Devil benefit of law, for my own safety's sake!”

I often think of that when I read the most extreme rightwing rhetoric, just as I did when I heard the most left wing rhetoric. Of course, I saw the movie version of Bolt's play during the Vietnam war.

The anti-Obama right beats the anti-Nixon left hands down. Yesterday a former governor and once and perhaps future presidential candidate, Mike Huckabee, offered a lengthy analysis during a radio interview about Obama's world view based on his having grown up with his father and grandfather in an anti-colonial atmosphere in Kenya. Huckabee saying later that he'd meant "Indonesia" seems inadequate in view of the specificity of the historical allusions in his original comment.

The U.S. right's campaign to delegitimatize an elected president on the most basic level -- his citizenship and his loyalty to his country -- is unprecedented in my lifetime.