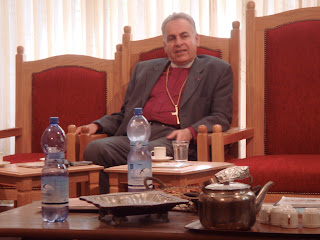 As bishop of Jerusalem, the Rt. Rev. Suheil Dawani, a Palestinian, presides over 7,000 Episcopalians in 60 parishes in five countries. The diocese also operates a famous hospital in Gaza and schools that serve 35,000 students (almost all Muslim). I took this picture of him in 2007. This January we St. John's pilgrims were back at his headquarters, historic St. George's Cathedral in east Jerusalem. We didn't see Bishop Suheil, though his colleagues in the diocesan offices seemed to be working late every night.

Now we know why. Since last August, the bishop and his family have been quietly challenging Israel's decision to deny them a renewal of their residency visas. Anonymous parties have made charges about real estate deals which he strenuously denies and which may result from rivalries within the diocese (oh, we church people!). Several governments and Buckingham Palace have all weighed in to try to solve the problem diplomatically. The matter became public this week when he filed a lawsuit. As the British Guardian reports today:

A senior church source outside Israel said: "No one can figure out what the Israelis are playing at. This is not the kind of message they should be sending out. They really don't need to be doing this. Dawani is a very decent, good man and no one has produced any evidence against him. As far as we can tell there is no substance to any accusations."

The bishop's office said: "This situation has continued for over six months as Bishop Dawani attempted to resolve this with restraint and without causing the government of Israel embarrassment. The lack of resolution, despite all the efforts, required [him] to seek legal counsel ... upon the recommendation ... he has chosen to take the case to court, seeking redress through the Israeli legal system."

In London an Israeli embassy spokesman said: "Israel is not interested in any unnecessary delays but the allegations are still under official review. We understand it is causing damage as long as it remains unresolved."