Obama Is The New Nixon 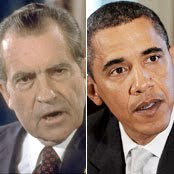 Reflecting on the politics and finances of presidential libraries, historian Maarja Krusten raises the question of whether the next one (probably either in Honolulu or Chicago) could end up being as controversial as the one in Yorba Linda:

Having come of age during the Vietnam war era, which saw some extraordinarily heated rhetoric used by some on the left against Richard Nixon, I never thought I would see so much vitriol again, with equally awful rhetoric now being used against Barack Obama by some on the right. The hatred, the reliance on lies or hyperbole, the disregard for the harm being done to the nation and to their side, seems much the same to me, it’s just coming from the other end of the political spectrum.

Thanks for the link! Great juxtaposition of photos, really well chosen.

Hard to say what will happen with Presidential Libraries. It's awfully hard to get people to talk about the issues. I jokingly wondered in the Archivists' forum what the reaction of Orange County officials would be to yesterday's hearing. The Libraries eat up a quarter of NARA's budget -- maintenance and upkeep is part of the federal burden and of course the government pays most of the staff -- and NARA faces the prospect of budget cuts in coming years. (Trust Fund positions only make up a small proportion of the staffing.)

Representing as they do a rather conservative area, would OC officials listen to the hearing, then call for reducing the federal footprint in OC and in Ventura County? Maybe ask NARA to close the two libraries in Simi Valley and Yorba Linda, shutter the museums and relieve the federal government of the responsibility for helping communities in California attract tourists? As they say in Washington, is toursim "an inherently governmental function?: Perhaps ask for privatization -- establishment of new museums with no link to NARA (isn't privatization supposed to be the rage among conservatives), de-link NARA activities from the foundations, and have NARA move the RR and RN records back to a vast facility in DC? No more fights over the content of exhibits, clean break, totally.

That would be the consistent thing to do if one is a fiscal conservative. A belief in localism and reliance on the private sector would suggest that if you want to attract tourists, you raise the money for toursit attractions in your own community, through taxes if municipal ventures, through contributors if private sector. What are the chances that OC officials will have an aha moment and say, why should American taxpayers -- people such as I, who live on the East Coast -- pay to help boost OC's tourims?

I'm not saying that's my position, not at all. I'm just having a little fun here with Orange County, as well as pointing out some of the elements that complicate these things. Far from working to separate the archival and museum functions, I bet most local officials would lobby to have future museums in their communities!