If It's Professor Evil, He Reaches Gazillions 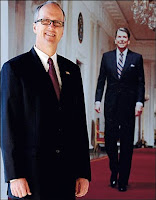 Duke Blackwood is a former USC official who now serves as director of the Reagan library in Simi Valley. In testimony he prepared for a congressional committee studying the future of presidential libraries, he reveals something he calls the downstream affect (though I think he means "effect"):

In our numbers driven society it is fair to ask how many scholars use presidential materials. While it is a good question, it shouldn’t be asked alone. You must also judge the impact of the use of our materials - not just by how many researchers are visiting. This is what I refer to as the downstream affect. A single scholar might publish multiple articles, books or blog entries that will reach hundreds, thousands perhaps millions of people. That same scholar may appear on radio broadcasts or television shows reaching even more people. That is impactful. Perhaps in the future we should take a look at collecting the downstream data as a way to provide you with another yardstick to measure our impact.

Happy indeed is the hard-working academic who reaches millions, especially when the typical user of the Reagan library reading room is probably working on something with a title such as "Conflict, Cooperation, And Conciliation: The U.S. And Latin America, 1983-85." But then you get the downstream...whatever. What would that be, tens of millions?

He wishes. Maybe libraries have gotten wind of budget cuts and are trying to boost their profile. It might perk up a couple of House committees on a Monday morning if you pretend that professors reach more consumers than "Toy Story 3." But you've got to worry about your credibility affect.
By Fr. John at 3:17 PM

I put up a post about this at my blog too. I just don't have your wonderful knack for great titles for blog essays, LOL.