Rocks Are Their Heads 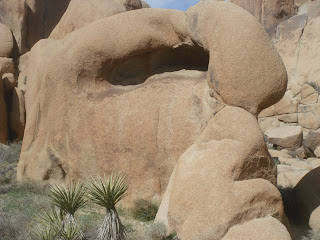 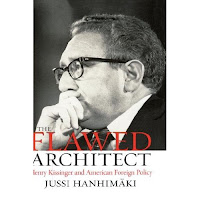 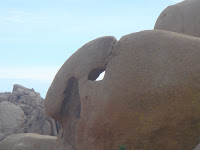 hua trees are the main event in Joshua Tree National Park, the rock formations make up a remarkable supporting cast. When the earth's crust was cooling 100 million

years ago, magma oozed up and formed massive monzogranite formations with remarkably consistent horizontal and vertical seams. Sometimes the rocks look like stacks of bricks. Sometimes, when fresh lava has
s 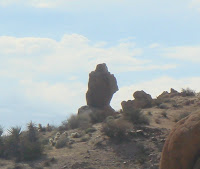 eeped between the older rocks and dried, it
looks like dinosaurs' spines. And sometimes you'll be wandering through the park and come across a rock that looks a heck of a lot like Henry Kissinger. Or a whale. Or the alien from "Independence Day." Or a solitary soul meditating in the desert.
By Fr. John at 10:28 PM