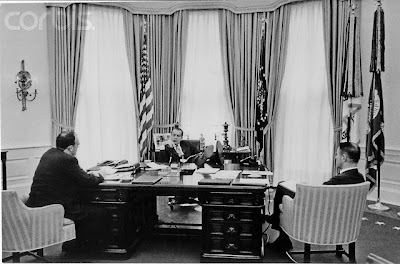 Some mornings former President Nixon would tell aides in his New York or New Jersey office that he just happened to see something fascinating or shocking on television while trying to find the news or a football game. We suspected that our still-overachieving boss didn't want anyone to think he was wasting his time. He did happily admit that he and Mrs. Nixon enjoyed watching "Murder She Wrote" and "Barnaby Jones" together.

By the late 1980s, he was urging us all to get C-SPAN, because for the first time he was able to watch uninterrupted senatorial hearings, think tank panel discussions, and other high capital dramas that for a politics and policy junkie such as him were the equivalent of pure heroin. (I had to tell him that because of the way his administration had set up the cable TV system, Jersey City, where I lived, hadn't yet let a cable contract, hence no congressional debates on Congress St.) And yet still, every once in a while, the easy availability of Carnegie Endowment seminars on U.S.-Russian relations notwithstanding, he'd tug on his lower lip with the end of his reading glasses and say, "I ran across the damnedest thing last night when I was trying to find the Mets game..."

In May 1971 in the White House, the President did the same thing with his aides Bob Haldeman and John Ehrlichman. The White House tape recorder captured his synopsis of an episode of "All in the Family" which he'd just happened to run across. The first episode of Norman Lear's epochal sitcom had been broadcast to rave reviews four months before, which suggests that as culture mavens, RN and his aides were behind the curve.

And yet as the tape below discloses, Messrs. Nixon and Haldeman were wise to Lear's moves. Archie Bunker dressed like a slob, Haldeman noticed; that meant you weren't supposed to like him. The former football player in the bar turned out to be gay, the President noted; that meant the show was twisting your melon when it came to assumptions about how gay people looked and acted. Postmodernists ought to have a field day studying a critical analysis of a cultural expression being performed by the individuals who were essentially among the objects of the expression itself.

The conversation turns from Archie Bunker (just like Meathead, RN keeps calling him Arch) to a dialogue on homosexuality that has made this tape segment the talk of the internet. The three men exhibited assumptions and anxieties about homosexuality -- I understand why they get up to that, but it shouldn't be glorified -- that were typical of their generation. The President, for instance, had been born in 1913. I'm surprised how few commentators and bloggers have pointed out that the chat occurred 38 years ago, just as gay liberation was picking up steam. George Carlin and Monty Python were still getting laughs with routines based on the same cultural stereotypes being indulged in the White House. By the same token, on another occasion President Nixon predicted that we'd have gay marriage by 2000, making him more progressive than the majority of California voters in 2008.

Fourteen seconds of the conversation have been bleeped by the National Archives on the grounds either of national security (doubtful in this case) or potential embarrassment to a living person. My guess is that the President and his aides were discussing national figures (not, the usual speculation to the contrary, J. Edgar Hoover, who is dead) or colleagues who were or may have been gay or lesbian.