A Free Man In Joshua Tree 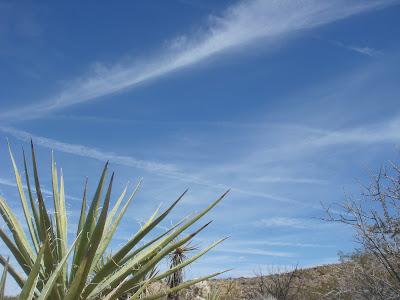 The morning sky over Joshua Tree National Park is crisscrossed with vapor trails left by planes flying east from Los Angeles, heading west to Hawaii, coming north from Mexico. After a while they look like clouds. All those people going somewhere, while Twentynine Palms stays the same, or seems to. Just two miles away from the quiet center of town is a teeming Marine base. An expansion of the massive facility will soon be underway, we understand. The high desert-based 2nd Battalion, 7th Regiment, 1st Marines lost 2 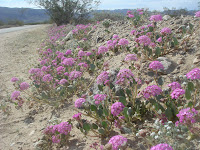 0 of their number at the hands of the Taliban during a difficult recent deployment in Afghanistan. So there are plenty of opportunities around town to thank young men and women for their service. But by and large visitors come to Joshua Tree for the peace and silence, the rock climbing, and, in the springtime, the desert flowers. 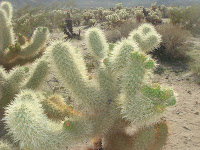 Yesterday it was 92 degrees at Cottonwood Spring, at the southern end of the park; today, around 86. Kathy and I climbed to the top of Mastodon Peak, which sounds a lot tougher than it really was. A few miles north, acres of cholla cactus spread across the desert, their spines glowing in the sun and seemingly from within. Of course everyone, including U2 and Gram Parsons, who died near the park in September 1973, comes for the Joshua trees, named by 19th century Mormon pioneers who were reminded of the great Hebrew Testament general gesturing heavenward. As sturdy as they look, they're prone to disease. They're pollinated only by a certain species of moth, so keep the mutually interdependent Joshua trees and yucca moths in your prayers. Tomorrow we're thinking of visiting Samuelson's Rocks, on which a Swedish gold miner carved his theological reflections. Can't miss that! 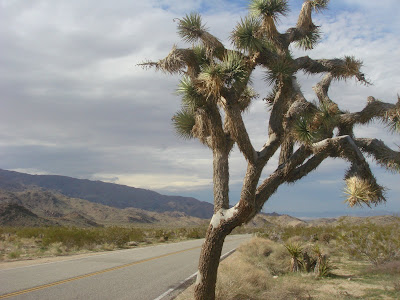