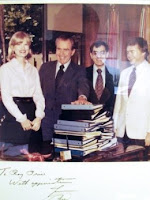 At The Ticker, published by Baruch College in New York City, Alfonso Guerriero shares comments on "Frost/Nixon" from an authoritative source, Ray Price (shown at right in the photo with other members of RN's interview prep team, Diane Sawyer and Ken Khachigian; missing is The New Nixon's Frank Gannon, who was probably either playing the piano or taking the picture):

Price, 78, knew President Nixon for 27 years while working as one of his speechwriters. He wrote both of Nixon’s inauguration speeches, and he helped write Nixon’s resignation speech in 1974. When Nixon resigned from the presidency, Price continued being a loyal friend and collaborated with the president on two of his 10 books before Nixon’s death in 1994. He also helped Nixon prepare for Frost’s interviews, along with...Sawyer and other aides.

Price did not hesitate when offering his thoughts on Frost/Nixon and Frank Langella’s portrayal of the President saying, "[the film] grossly distorted the facts and reduced his character to a Hollywood caricature."