Missing Samuelson's Rocks By That Much 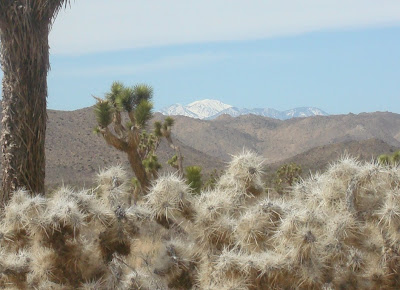 John Samuelson came to Joshua Tree in the 1920s, living in the wilderness with his wife, Margaret, and working his gold claim. In 1928, when he tried to acquire the title to his homestead, the land office learned that he was a Swedish citizen and turned him down. He sold the claim and moved to Los Angeles, where he got into a fight with two men at a dance in Compton and killed them. He ended up in mental health facility from which he escaped in 1930. He died in the 1950s in Washington state after being injured in a logging accident.

This information comes from a National Park Service web site. Not so easy to find is the cluster of rocks in the Lost Horse Valley in Joshua Tree National Park where Samuelson carved his reflections on life, the universe, and everything. When Kathy and I inquired in a park office this morning, a ranger told us that the trail to Samuelson's Rocks wasn't officially maintained. She did give us a slip of paper telling us to look for mile marker 22 on the main road through the park and an old road trail nearby. A mile 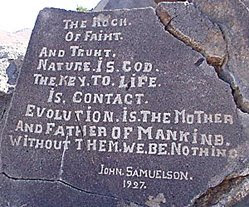 south was a braided wash. Turning west, we'd find the rocks after walking another half mile or so. "I think the mile marker may be missing, though," she added.

Using the odometer on the mighty Saturn to measure the specified 1.7 miles from Quail Springs, we found what looked like an old road trail and then a wash running east to west through the valley. We hiked back and forth but couldn't find Samuelson's Rocks. It occurred to us that the National Park Service wasn't exactly making it easy for us to do so. Who knows why. Perhaps in the next stimulus bill there will be money to improve the trail. In the meantime, here's a photo from the feds' web site showing the wisdom of John Samuelson on matters theological and scientific. Another of his carvings, apropos of his times if not ours, reads:

The milk of
human kindness
ain't got thick
cream on it for
all of us
Ask Hoover
By Fr. John at 9:43 PM

I was there yesterday. I had the same slip of paper. Mile 22 marker is there, but on the wrong side of the road. Easier to measure the 3.4miles from the entrance, park and hike.