Musical Memories That Will Long Endure 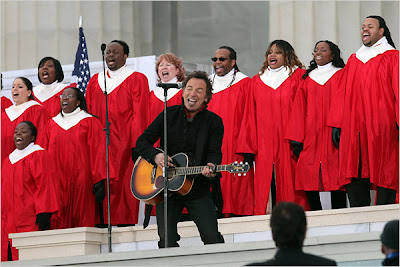 I'm glad the PE is confident that the United States will endure, as he said today at his Lincoln Memorial concert. I didn't think we were so pessimistic as to think otherwise. It was an allusion to FDR's 1933 Inaugural Address:

This great Nation will endure, as it has endured, will revive and will prosper.

But Mr. Obama's remark didn't come out quite as elegantly. The only other off note in HBO's broadcast of the concert was Garth Brooks' performance of the Isley Brothers' 1959 song "Shout." The rendition was more closely patterned on that of the fictional band Otis Day and the Knights in "Animal House," complete with Brooks and members of the backing choir making like John Belushi and Flounder in the basement of Delta House.

But then there was Bruce Springsteen singing "The Rising" with his acoustic guitar and a gospel choir. U-2 performing "Pride (In The Name Of Love)," about Christ and Martin Luther King, Jr., from the very place most associated with King. Stevie Wonder, Usher, and Shakira together on "Higher Ground." Pete Seeger leading the crowd in "This Land Is Your Land." Will we ever have a Republican inauguration with such musical moments? Hard to imagine.
By Fr. John at 1:10 AM