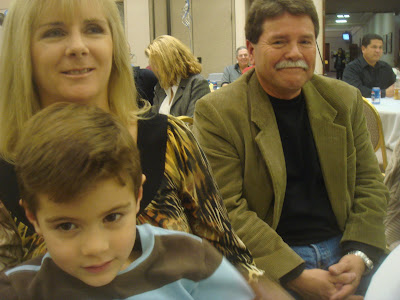 Les Mesa, retiring from the Brea-Yorba Linda, California police department after 34 years, was celebrated at a testimonial dinner tonight as a modernizer, a loyal, big-hearted friend, and a skilled teacher of techniques for suppressing violent suspects without the use of firearms. As speech followed laudatory speech, Les's seven-year-old son, Jared (pictured above is five-year-old Brian and their mother Liz) stole the show when he took the microphone and said, "Congratulations on your retirement, daddy. We're really happy we'll get to see you more."

At the Nixon Library, he handled VIP protection for 18 years as we've welcomed Presidents, First Ladies, VPs, governors such as Arnold and Jesse, presidents from the Balkins, vice premiers from China, and about half the U.S. Congress for President Nixon's 1994 funeral. Calmly and cheerfully, Les massaged egos and made everything run smoothly. He even played third base for two years on the Library's co-ed softball team. His sizzling throws nearly put a hole in my mitt at first base.

In his remarks, Les told us about the time he and his partner were the first officers at a grisly scene about three miles from the Library, on Imperial Highway at State College. On the way to commit an armed robbery, a man adjusting the sawed-off shotgun hidden under his jacket managed to blow his right arm off and put a basketball-sized hole in the roof of his Toyota pickup.

As Les was getting his bearings, five Santa Ana police cars whizzed past on a nearby freeway, chasing a suspect on a motorcycle. An hour later, the investigation was still going on, and so was the high-speed chase, now on State College. As the suspect approached, Les, mildly irritated at the disruption of his crime scene, took out his nightstick (remember his skill in avoiding guns when possible) and knocked the guy off his motorcycle, only to realize that he'd done so in full view of the news crews covering the case of the self-disarmed robber.

Les's career survived the publicity, lucky for us.
By Fr. John at 9:32 PM