Li And Glen, Ji and RN -- Together Again 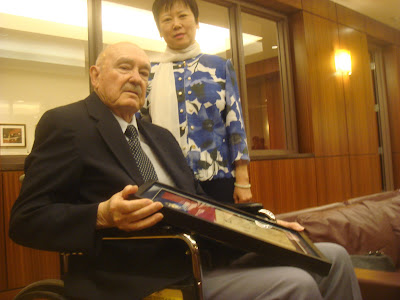 A fighter pilot from Nebraska, Beneda was shot down over Japanese-occupied China in May 1944 during a Flying Tigers bombing raid. After crash-landing his single-engine P-51 Mustang in a rice paddy, the injured Beneda evaded capture for two months until meeting up with the Chinese communist New 4th Army, commanded by Gen. Li Xiannian. Li later became President of the People's Republic, serving from 1983-1988. His daughter, pictured above with Beneda, is VP of the Chinese People's Association for Friendship with Foreign Countries. She's perhaps China's leading citizen diplomat.

China is justifiably proud of its pre-revolutionary collaborations with Americans against the Japanese. Beneda is treated like an emperor when he visits China with his wife of 63 years, Elinor. She was a farm girl, sister of an air corps buddy of Beneda who died in a 1943 bombing mission over Romania. She told me Glen was a city boy -- 6,000 in his town, she said.

During a ceremony at the Library, Beneda reciprocated China's friendship by pre 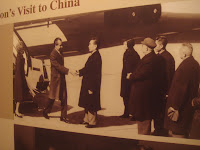 senting Madame Li with his "walkie pointie," a phrasebook he used to communicate with the Chinese farmers who helped him along the way, as well as the Chinese flag he carried with him.

Madame Li and other Chinese officials were in Yorba Linda to show reporters a new exhibition marking the 30th anniversary of the opening of formal diplomatic relations between Washington and Beijing. The exhibit (on display through Friday before moving to longer installations back east) includes the famous photograph (above left) of President Nixon shaking hands with Premier Zhou Enlai at

Capital Airport in Beijing during their historic meeting in February 1972.

Oddly, someone's missing from the photo in the exhibit. Standing directly behind Zhou at the airport that day was translator Ji Chaozhu. You can see him in the picture at right. Though Ji, one of China's most respected diplomats, later served as ambassador to the Court of St. James's as well as an undersecretary of the United Nations, he fell out of favor in Chinese politics and was airbrushed out of this most photo revered of photos. Although Ji has long since been rehabilitated, the Ji-less picture of the first Nixon-Zhou meeting still shows up occasionally in publications -- and now exhibits. 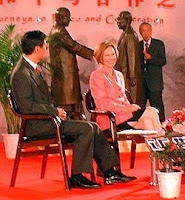 I was along in November 2002 when Julie and David Eisenhower visited Beijing to mark the 30th anniversary year of the Shanghai Communique. Appearing on Chinese television with Ambassador Ji, Julie decided to put him back in the picture (which I took the liberty of snapping, with a first-generation digital camera). As I wrote at the time:

Mrs. Eisenhower knew about the altered photo and had presented Mr. Ji with an autographed copy of the real McCoy during an earlier visit. She decided to do him one better with the cameras rolling. "I'd like to ask Ambassador Ji to show us where he was standing when my father met Zhou Enlai," she said. Mr. Ji gamely jumped to his feet and took up his accustomed position next to the statue of his late boss. He said he recalled President Nixon reaching for Zhou's hand and saying, "This handshake comes across the vast Pacific ocean and many years of no communication."