Lake Forest Rules! Plus He Wore A Tie 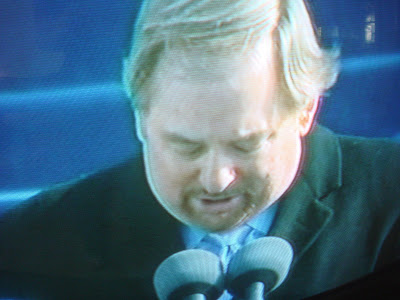 Pastor Rick prayed an eloquent prayer, especially the "forgive us" litany and the acknowledgment that God loves all his people. He enunciated well saying Malia and Sasha.

People will inevitably debate his decision to end with the Lord's Prayer, which Jesus taught to his disciples and apostles. I prayed it with him. But many could not. Warren didn't mean to offend non-Christians. As a Southern Baptist, he meant to evangelize them. But in this sacred moment of national unity, to which he was called for civic and not religious purposes, a pastor essentially excluded millions of Americans.

The President-elect, his eyes closed, did not move his lips during the Lord's Prayer.
By Fr. John at 8:45 AM

A pastor's "religious duty" is never trumped by his "civic service." He submits to a higher authority that public opinion. You should know this.

I am intrigued by your comment that Rick Warren, being a Southern Baptist, meant to "evangelize" those listening to the prayer.

Didn't Peter "evangelize" on the day of Pentecost when "about three thousand souls" were added to the church? Didn't the other Apostles spend the remaining part of their lives after Christ's ascension "evangelizing"? Isn't the Apostle Paul known for his evangelizing efforts?

Was Peter a Southern Baptist? Was John? Was Paul? Or were they simply Christians, engaging in the duty that all Christians are to engage in...that being the proclamation of the good news of Jesus Christ?

Did Jesus not command us to, "Go therefore and make disciples of all the nations, baptizing them in the name of the Father and of the Son and of the Holy Spirit, teaching them to observe all things that I have commanded you." How can you do this if you do not engage in evangelism?

The Rev. Otis Moss just showed exactly how to do it at the National Cathedral. "O LORD, our strength and our redeemer." "In the name of our LORD." The theology and language of Christian faith, available to all. AMEN!

So now the Lord's Prayer is a act of "exclusion"? Interesting.

If that is the case, then calling Jesus Lord is also an act of exclusion, because for many in this nation...Jesus is not Lord nor is he their redeemer. Which means Rev. Moss was excluding millions of Americans with his comments as well.

Why then single out Warren?

I like the approach of the Boy Scouts. Everyone is encouraged to pray in accordance with his or her own faith's tradition and beliefs. So when a group of Boy Scouts is led in prayer, the one praying prays in his or her own way. If the voice of the prayer is a Jew, then it's a Jewish prayer. That probably wouldn't work in a national political forum, but I would like to see us move in that direction.

Tripp asks an interesting question. I like LORD in an interfaith context because it implies servanthood and humility on the part of the believer, no matter what the creed. When I say LORD, I am in subjection (in my case, under Christ). It is my prayer that all people will find freedom and peace by giving themselves to the God who made them.

Let me stress that there is no perfect solution. No prayer coming out of one faith will ever satisfy everyone. And yet I always find some magic in the middle. I would've hoped both Bishop Robinson and Pastor Warren would have found a way to refer to God's work of creation, redemption, and sanctification without mentioning Jesus Christ.

And I didn't single out Pastor Rick, having previously written that I was disappointed the Bishop went too far in the other direction.

Consider this well known atheist telling Christians they ought to be ashamed if they don't evangelize. Or that they aren't evangelizing because they are ashamed.

Why should Pastor Warren be ashamed of Christ? If he catches flack for it we know that even the best things this world have to offer are not even fit to be compared to the smallest joys of heaven. So he is reviled by servants of satan for a few years here on earth and then goes on to eternal glory...

Where's the comparison?
Where should the loyalty lie?
Anybody acting even in true Christian self-interest would choose the way that brings glory to God.

What, exactly, does the Lord's Prayer contain that would be offensive or exclusionary to anyone of any faith? Either a Muslim or a Jew could easily pray this prayer without blinking an eye . . . except, perhaps, for its association with Jesus and the Christian faith.

Just for the record, I don't think saying the Lord's Prayer or saying Lord is an act of exclusion in the negative sense.

And as God's Word says, one day "at the name of Jesus every knee should bow, in heaven and on earth and under the earth, and every tongue confess that Jesus Christ is Lord, to the glory of God the Father."

Warren's use of the Lord's Prayer was God-honoring. We need more of that in our public arena today, not less.

You wrote, "without mentioning Jesus Christ," but is this not the essence of being a Christian, confessing Christ with our mouths? Why deny him by leaving him vocally absent, by making him anonymous or generic? This is not honoring. And why, even in an interfaith context, should Christians think it best to act as though they are not Christians but generic believers? This is not honesty. This is hiding the light of Christ Jesus.