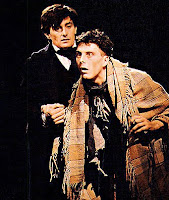 In Charles Dickens' The Life And Adventures Of Nicholas Nickleby, a young man has freed an adolescent orphan from an abusive Yorkshire schoolmaster. They're now bound for Portsmouth, fleeing London to avoid causing Nicholas's mother and sister more grief, and we get some masterly reflections on aging:

A broad, fine, honest sun lighted up the green pastures and dimpled water with the semblance of summer, while it left the travellers all the invigorating freshness of that early time of year. The ground seemed elastic under their feet; the sheep-bells were music to their ears; and exhilarated by exercise, and stimulated by hope, they pushed onward with the strength of lions.

The day wore on, and all these bright colours subsided, and assumed a quieter tint, like young hopes softened down by time, or youthful features by degrees resolving into the calm and serenity of age. But they were scarcely less beautiful in their slow decline, than they had been in their prime; for nature gives to every time and season some beauties of its own; and from morning to night, as from the cradle to the grave, is but a succession of changes so gentle and easy, that we can scarcely mark their progress.

Photo: Roger Rees and David Threllfall as Nicholas and Smike in the 1982 Royal Shakespeare Company's production of Nicholas Nickleby
By Fr. John at 11:52 AM

What a wonderful passage. One I particularly enjoyed reading this month of birthdays, with I just having turned 60 and Mom about to turn 90.

Nicholas Nickleby is one of my favorite works by Charles Dickens. I especially like the fact that you pictured Rees and Threlfall. The RSC production, which I never saw on stage but saw on tv in the early 1980s and often have watched since on VHS (gotta update to DVD if I can), is a big favorite of mine. I think of it whenever I hear "God Rest Ye Merry Gentlemen" (one of my favorite carols as a result) at Christmas time.

Dick McNeill, the A-V supervisory archivist at the NARA Nixon Project, knew I liked the RSC production (I think he had seen it on tv, too). When I came in to work at Pickett Street wearing the corduroy knee-length pants that briefly were in style for women in the 80s, McNeill called me Nicholas Knickerby!

How in the world was I a Reagan Republican back then; my 1980s era attire always was avant garde and cutting edge, including wearing blue or black nail polish. I even used to wear the deliberately mismatched earrings you saw in some of the early music videos on MTV, I didn't look the part of what I then thought was a conservative Republican, at all! I've since come to realize I was moderate on most issues and conservative only on a few. Maybe the somewhat non-comformist attire and occasional rebellious streak I displayed during the 1980s were a clue that I would become an Independent by 1990!

Thanks, MK, and thanks for the inspiration to finally order NN on DVD.

As I e-mailed you, I was listening to the cast album today. Whenever I hear "God Rest," I too think of the last scene of the RCS production. I assume Oliver did the orchestration, which at the end subverts the optimism of the carol as Rees stands alone on stage, holding another helpless child. Wow!

It's amazing how many people that production resonated with.

Thanks again for your reflections (and for the reminder of Dick McNeill's wit).