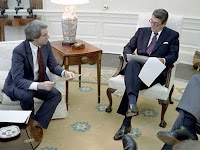 Speaking this morning with NPR's Audie Cornish, Reagan budget director David Stockman explains how Democrats have poisoned and paralyzed discourse about the federal deficit by stigmatizing any talk of cutting Social Security and Medicare and Republicans have done so by stigmatizing tax increases (often by forgetting to mention their hero Reagan's $400 billion a year in new taxes).

Stockman's right. They're all a bunch of scoundrels. The "Compact With America"? "Compact" is the operative word. Cutting a few hundred billion from discretionary spending? Chicken seed. Peanuts. Pennies on a $1.4 trillion annual problem, victimizing the least among us to protect the vested.

From now on, I don't want to hear from any president, senator, or congressman who doesn't talk about the three-legged stool of some entitlement cuts, some defense cuts, and some tax increases. Any politician who fails to do so is putting the future of our country at risk for the sake of his career. Rep. Jim Rogan did what he thought was right even though he knew he'd lose his seat. Saving the U.S. from stagnation and bankruptcy will take his kind of honesty and courage. President Obama could make the first move by speaking up for the findings of his own deficit commission.
By Fr. John at 4:16 PM