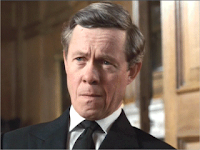 I'm rereading Charles Dickens' Nicholas Nickleby by listening to an audiobook narrated by Alex Jennings, who portrayed Prince Charles in "The Queen." Published in 2009, it's an affectionate and affecting performance in which the brilliant actor gives distinctive voices to maybe 30 characters, male and female, young and old, poor, rich, and pretending to be rich.

For a few (especially sadistic Yorkshire schoolmaster Wackford Squeers and an insinuating gigolo, Mr. Mantolini), Jennings seems to have been inspired, and naturally so, by performances from the Royal Shakespeare Company's 1982-83 production. For a couple of others, he channels Luigi Vercotti, the nightclub owner portrayed by Michael Palin in Monty Python's Piranha Brothers skit.

Dickens may also have influenced the Pythons. A passage in chapter 22 foreshadows one of their most famous skits. Nicholas and his friend Smike, on the way to Portsmouth, stop at an inn and ask about dinner:

"Why--what would you like?" was the landlord's no less natural answer.

Nicholas suggested cold meat, but there was no cold meat--poached eggs, but there were no eggs--mutton chops, but there wasn't a mutton chop within three miles, though there had been more last week than they knew what to do with, and would be an extraordinary supply the day after tomorrow.

"Then," said Nicholas, "I must leave it entirely to you, as I would have done, at first, if you had allowed me."

In Monty Python's "Cheese Shop," the dialog between customer John Cleese and proprietor Michael Palin goes like this:

"Now then, some cheese please, my good man." 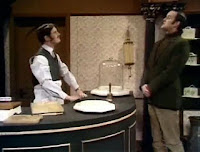 "Oh never mind, how are you on Tilsit?"

"I'm afraid we never have that at the end of the week, sir. We get it fresh on Monday."

"No matter. Well, stout yeoman, four ounces of Caerphilly, if you please."

"Ah. It's been on order, sir, for two weeks. I was expecting it this morning."