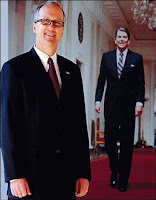 In an April 30 talk at the Miller Center at the University of Virginia, where he worked for eight years before I recommended him as the first federal Nixon library director, Tim Naftali revealed that over cocktails in Charlottesville, Virginia one evening in June 2010, Reagan library director Duke Blackwood (left) and Naftali's boss, assistant archivist of the U.S. Sharon Fawcett (below), demanded his resignation -- as a sop, Naftali said they claimed, to loyalists of disgraced Nixon chief of staff Bob Haldeman:

If I would resign, I would get my [Watergate] exhibit....They wanted to give my head to the archivist of the United States on a platter...[Then] maybe the Nixonians would stop pushing. I thought this was outrageous...[They said,] "Tim, this is the only way your Watergate exhibit is going to happen. You've got to resign."...I didn't, of course.

Beginning in the fall of 2009, Richard Nixon and Haldeman's lower-level, non-policy operatives had been waging a ruthless campaign to stop Naftali's Watergate exhibit at all costs. They failed. The National Archives opened the exhibit in March 2011, generating the most publicity for the Nixon library since it opened 22 years ago. But there's no question that it was a close call for Naftali, since, as he tells it, his bosses at the Archives were at war with one another over how to handle the demands of Haldeman's operatives. That Blackwood was essentially carrying the Watergate for them is especially significant since he's a federal official who is paid a six-figure salary by U.S. taxpayers -- just like the Nixon factotum-turned-U.S. senator, Lamar Alexander, who also had Naftali in his sights, at the behest of one of Nixon's advance men.

Why roll out all that firepower? According to Naftali, the Haldeman tribe wanted to perpetuate the Watergate coverup by keeping the public from seeing videotape in which operatives such as Fred Malek discussed counting Jews in the federal government and Dwight Chapin, jailed for Watergate-related crimes, accused Nixon of being present when 1972's campaign dirty tricks were launched. "They were defending themselves," Naftali said of those who had taken control of the Nixon foundation. "It was no longer about the president."

Naftali knew he would have been crazy to submit to Blackwood and Fawcett (a colorful account of Blackwood's maneuver was first published, without his name attached, by historian and blogger Maarja Krusten). Later events revealed by Naftali in his hour-long Miller Center talk made clear that some at the National Archives (presumably including Fawcett 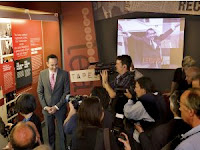 , or so Naftali implies) were willing to replace his Watergate text with an outline dictated by the foundation's Watergate truth squad, of which perjurer Chapin was the most notable member. If Naftali had quit, it's a good bet that the custodians of the Declaration of Independence and U.S. Constitution, faithfully preserved all these centuries, would have shredded his exhibit before the ink dried on his severance check.

Instead, the archivist of the U.S., David Ferriero, ultimately and unmistakeably backed Naftali. Fawcett announced her own resignation and reportedly received a consultancy offer from Haldeman's men. Based on Naftali's public comments, many questions remain about her role. Why did Fawcett need Blackwood's help in trying to axe Naftali? Did Ferriero know she was using one of his library directors to leverage the ouster of another (some NARA observers are certain that she acted on her own authority)? Did Fawcett, a canny civil service lifer, really think the scholarly community would've stood by while she greased the skids for a widely respected Cold War historian for the sake of the reputations of Bob Haldeman, Fred Malek, and Dwight Chapin?

Whether we learn the answers to any of these questions, Naftali's triumphant if emotionally charged presentation at the Miller Center proves that the dictum about history being written by the winners also applies to scrappy public historians who defeat shadowy private interests. The library director with nine lives even scores a late hit on his would-be executioner by critiquing the Reagan-adoring federal museum in Simi Valley, California, which in 2011 finally added a full exhibit on the Iran-contra scandal. That effort doesn't impress the curator of the Nixon library's warts-and-all-gate. "'Mistakes were made'; passive voice," Naftali said, summing up Blackwood and his colleagues' handiwork on the Reagan scandal, which some argued was worse than Watergate. "Reminds me of Pravda."
By Fr. John at 4:45 PM