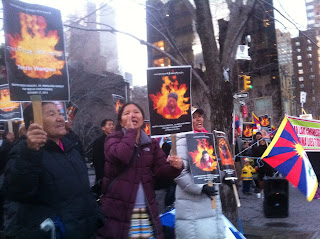 During the last year, to protest Chinese rule at least 16 people, including monks and nuns, have immolated themselves in Tibet and ethnically Tibetan regions of neighboring Sichuan province. Fifty demonstrators across the street from the UN late this afternoon waved victims' photos and Tibetan flags and shouted angry denunciations of the Chinese communist government: "No justice, no peace!" "China kills!"

While Beijing insists that Tibet has always been part of China, Tibetans say the region was autonomous for much of its history. China reasserted control after the 1949 revolution and says it won't ever let go. It squeezes until it hurts. Along with hundreds of millions of Chinese, Tibet's people experienced the worst of communism's privations. Hundreds of thousands died during Mao Zedong's Great Leap Forward. Communist forces destroyed thousands of

monasteries. The Dalai Lama, Tibet's spiritual and political leader, was driven into exile in 1959. Official state atheism notwithstanding, Beijing will prayerfully discern the name of his successor to ensure that he'll toe the line on Tibet's permanent status as part of China. The central government brutally suppresses all manifestations of separatism. Its forces have killed several Tibetans in crackdowns over the last week.

Although China's treatment of Tibet is scandalous, there's little if anything the U.S. can or will do. It does regularly register its concerns to China. Barack Obama even invited Beijing's ire last July by meeting with the Dalai Lama. 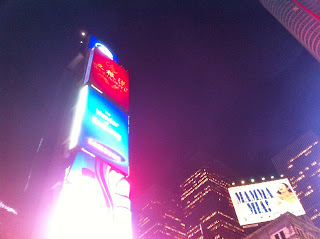 But it's hard to imagine this or any administration risking a significant worsening of relations with Beijing for little Tibet's sake. China denounces all alleged inferences in its internal affairs. Being a dominant player in global and American markets buys a lot of deference. In Times Square, the bright red panel crowning this video tower, a potent symbol of capitalism, has been purchased by China's propaganda arm, the Xinhua News Agency, an ironic counterpoint to the demonstrators a few long blocks away, the types Xinhua calls bandits.

When two great peoples have interests in common, a numerically small people like the Tibetans will lose out. But China should understand that they'll probably never lose heart.