The Continuing War Against John Dean

Nixon White House staffer Geoff Shepard (left) says his ex-colleagues "did some horrible things." The colleague the Nixon-Bob Haldeman operatives now controlling Nixon's foundation consider maximus horribilis is John Dean (below), who helped send their friends to jail for their Watergate crimes. In 2009, they went to war against former Nixon library director Tim Naftali after he invited Dean to give a talk. Among the schemes disclosed so far was getting another former Nixon aide, Sen. Lamar Alexander, to pressure Naftali or worse by putting a secret hold on President Obama's nomination of a new archivist of the U.S. Shepard also tried to keep the public from seeing Nixon's 1975 grand jury testimony.

Beginning tomorrow, the Chapman University law school in Orange, California is convening a 40th anniversary Watergate symposium that features Dean. We learn today that Shepard's been trying to get 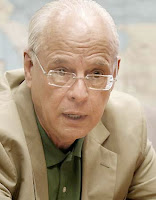 onto the bill so he can call the former White House counsel a nutcase and fool to his own bad face. But the professor convening the confab said no thanks:

"Look, I don't want to hurt people's feelings," [he] says of Shepard's draft, but there wasn't much intellectual content and it was marked with innuendoes.

The politics still swirling around Nixon in the county of his birth is, to borrow the columnist's word, complicated. Who can say what will happen next as the struggle over his legacy continues? The irony is that while there's a good case to be made in defense of some of Nixon's actions during Watergate, attacking Dean doesn't help him anymore. It just helps his men.
By Fr. John at 1:22 PM