In Those Days, Editors Paid Peanuts 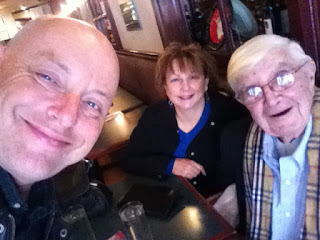 Bill Thompson (shown with Kathy and me this afternoon at lunch on the Upper East Side) was an editor at Doubleday in 1973 when he decided to offer a $2500 advance to a struggling young writer named Stephen King for a book called Carrie. In the late 1980s, he was running a short-lived imprint, Wynwood Press, when another unknown novelist sent him a manuscript that several publishers had already turned down. "Even the coffee stains had coffee stains," he said. But Bill thought A Time To Kill was a great yarn, so he gave John Grisham his first contract.

If you're keeping score, that means Bill Thompson discovered two of the top-selling U.S. fiction writers of all time. The same day he released Grisham's first novel, he also published mine, which was read by dozens. Two out of three ain't bad.

Kathy and I got to know Bill in the mid-1980s when we assisted Richard Nixon, along with his chief foreign policy adviser Marin Strmecki, on his sixth book, No More Vietnams. Bill was then working at Arbor House, where he helped the great Elmore Leonard (whose Rum Punch became Quentin Tarantino's "Jackie Brown") achieve his first bestseller, Glitz, by getting cartoonist and Leonard fan Charles M. Schultz to draw a panel showing Snoopy engrossed in Glitz. On the basis of that success, he persuaded Nixon to give Arbor House a try and did very well by 37's defense of the Vietnam war and his own policies.

This afternoon's conversation was a leisurely one about, among other things, the radical changes in the book business and Bill's continued cutting-edge work in helping promising new writers. He doesn't have a Kindle yet, and he said he got a headache when I tried to show him how to read the Economist on my phone. But we decided that as long as people keep reading, it doesn't much matter how.
By Fr. John at 2:31 PM

John: Great pic of you all with Bill --- and thank you so much for recommending me to him -- we are now working on our second book together -- he's a joy to work with! -- David R. Stokes

"In Those Days, Editors Paid Peanuts"

In this economy, I guess the old proverb: The more things change, the more they stay the same,"might lead us to a cliché: "truer words were never spoken."

a quote, a proverb and a cliché, I do have some thoughts of my own, but I couldn't have said it any better. No really I do

How do I listen to this interview?