Mad And M.A.D. In Yorba Linda 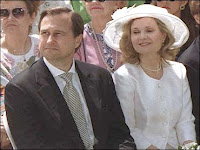 Rereading my April 19 post about the war against the Nixon Center by the White House and Bob Haldeman operatives controlling Nixon's foundation in Yorba Linda, I've come to regret suggesting that what is now the un-Nixon center (thanks to angry Watergate revanchists who forked over $2 million of a non-profit organization's assets to diss center president Dimitri Simes) had violated the parties' non-disparagement agreement.

That indeed looked at first like a first strike. But then I reread Ben Smith's analysis at Politico of the foundation's war on Simes, the U.S.-Russia relations expert Richard Nixon chose as center president. Smith names Simes foes such as Tricia Cox (wife of New York GOP chairman Ed Cox) and longtime Cox water carriers Rob Odle (a former CREEP official) and the Nixon White House's Ken Khachigian. All three are foundation board members.

Some of the hits on Simes aren't attributed. If he got wind of the smears as the article was being prepared and concluded that they were coming from persons associated with the foundation, he would naturally have surmised that they considered the agreement they had signed to be (as Nixon press secretary Ron Ziegler might have said) inoperative. Whether or not Simes would have been correct in such assumptions, Kalb's blog post would then have been (in the increasingly apropos mutually-assured-destruction language of the Cold War) a Simes counterstrike.
By Fr. John at 10:58 AM