James Hohmann is a 24-year-old Politico reporter who covered last night's Bob Woodward-Ben Bradlee appearance at the Nixon library. He majored in U.S. history at Stanford and gets assigned stories that require a bit of historical perspective.

As he labored on his laptop, I pestered him with questions about the dramatic changes afoot in the newspaper business (my parents' field and briefly my own) and the role of his scrappy news organization, which prints five issues a week when Congress is in session but seems to be better known for its web site. The president and CEO is former Reagan aide Fred Ryan.

Hohmann smiled ruefully and nodded when I observed that Politico reporters appear to file a lot of copy, as they used to say in the business. From his lengthy report, which he filed within three hours of the end of the event:

In the crowd was John Taylor, the longtime director of the museum and a former chief of staff to Nixon after his presidency.

“Mr. Woodward is the most famous journalist in the world, not an ideological figure by any means, and someone who is integrally, along with his editor Mr. Bradlee, part of the story of those times,” he said beforehand. “And eventually it would look strange if the library didn’t invite people like Mr. Woodward and Mr. Bradlee because, again, the visiting public understands that they’re part of the story.” 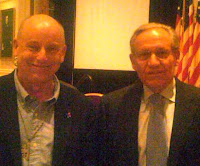 Taylor approached Woodward after the event.

Woodward told him that he didn’t want to sugarcoat his message — that Nixon loyalists tried to manipulate history — just because he was speaking at the Nixon Library.

Taylor, who stepped down in 2009 from his museum post and now serves full-time as an Episcopal priest, indicated that he understood and joked with his wife [Kathy O'Connor, Nixon's last chief of staff] about the two of them being “field marshals in the war against history.”

“History will work it out,” he said, expressing confidence that Nixon will be judged better with the passage of time.