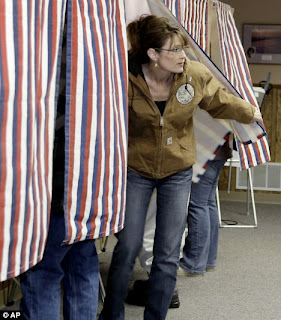 Political journalist Meghan Daum responds to friends and colleagues who ask why she doesn't take the gloves off when writing about Sarah Palin:

Alas, we cannot. Not only because it would be cheap and lazy and unbecoming, but also because Palin is too well-shielded by her own incompetence. By casting herself as the less privileged, less polished outsider in the fancy school, she fashions the rest of us into playground bullies (ironic, given her predilection for bullying language) who taunt her with big vocabularies and book learning and obsession with nuance. By playing the victim (ironic, given how closely she associates victimhood with liberal whining), Palin forces her critics to choose between the roles of merciless oppressor and guilt-ridden enabler. And since the merciless oppressor part is already played ably by various screamers on blogs, cable TV and Internet comment boards, writers like me have taken the other route, leaning over so far backward to avoid saying the obvious that we sometimes can't get enough air in our lungs to say much at all.

That's why I truly hope Palin continues to fight her temptation to run for president. If there was ever a candidate who brought out the worst in people, who encouraged hollow rejoinders but made honest analysis almost impossible, it is she. Besides, if she did run, I'd have to write about her. And all the yoga in the world wouldn't keep my spine from eventually breaking from those backbends.

Two thumbs up on this one, John!