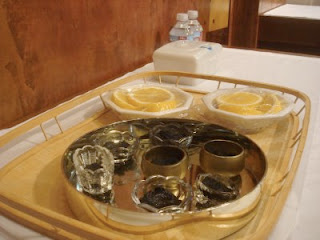 I kept them in my old 1928 Book of Common Prayer: Five crosses from Palm Sunday services I attended when I was a boy in Detroit during the 1960s.

My mother, Jean, gave me the leather-bound book, with its golf-leaf, onionskin pages, when I was confirmed in 1967. The crosses were pressed in the front, where she’d written her dedication. I’d finger them when I got the book down from the shelf to check an old prayer or service. They were dry but not as brittle as you might think, as though I’d put them there last year rather than during the Johnson administration.

Seeing them always made me think of going with my mother and grandparents to the Cathedral Church of St. Paul on Woodward Ave. On the way, we’d drive by the Vernor's ginger ale plant. Afterward we’d go to a diner for silver-dollar pancakes or the Art

Institute for an egg salad sandwich and a peek at the famed Diego Rivera murals and an Egyptian mummy that was on display.

Every year at St. John’s Church, repeating the Altar Guild’s call to bring in last year’s crosses so we could burn them for Ash Wednesday, I’d feel a little guilty about my hoard of keepsakes.

But this year, driving to church on the morning of the last Sunday after the Epiphany, I thought about an Altar Guild member who was so eager to light the mighty pyre that she was coming to church in the throes of her recovery from surgery. I thought of my children or grandchildren finding the crosses on some occasion (far in the future, I trust) and wondering what to do with them. I realized that my memories were alive in my heart and spirit and that in any event my precious crosses, lent but not given, were a half-century overdue.

So I added my ancient crosses to our congregants' newer ones, to be formed into fateful black marks on a thousand foreheads Wednesday during four services at our Orange County Episcopal church and school. Remember that you are dust, and to dust you shall return.

If anyone says he's thirsty after Ash Wednesday service, I'll recommend he try a Vernor's.
By Fr. John at 8:12 PM

Beautiful, beautiful post. Very touching. I mentioned it in my own archives focused post this morning ("Broader interest, deeper analysis, more vigorous advocacy"). Thanks so much for putting this up, I've re-read it several times. . . .

Thanks, MK. It also resonated with the other Detroiters in our congregation, one of whom (or so his wife tells me) still drinks his Vernor's with milk.