Bob Woodward, Me, And Nixon's "Nonsense" 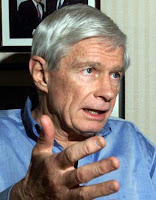 As she writes this morning at NixoNARA, historian Maarja Krusten was still working at the National Archives' Washington-area Nixon Project in 1988 when journalist Bob Woodward came looking for details about the investigation President Richard Nixon had ordered years before into how many Jews were working for the Bureau of Labor Statistics.

It was the last year of the Reagan administration. The Nixon aide who received and followed the order, Fred Malek (above), was up for a top GOP job. I was then Nixon's post-presidential chief of staff. After the story by Woodward and his Washington Post colleague, Walter Pincus, was published, I wrote an op-ed piece in the Washington Times accusing the Post of recycling a story that Woodward and Carl Bernstein had first reported many years before in their book The Final Days.

The afternoon my article appeared, Woodward called me. While he said that he hadn't recalled the reference to White House Jew-counting in The Final Days until he read my article, he insisted that Malek's prominence in party circles made it news once again. He also questioned my labored contention that Nixon's obsession with Jews could be entirely accounted for by his obsession with liberals.

When I asked Woodward if he thought Nixon was anti-Semitic, he said, "I don't know." As for Malek, he told the Post in 1988 that Nixon's fears about a cabal of Jews manipulating economic statistics to his detriment were "ridiculous" and "nonsense." But more recently, as Krusten notes, Nixon library director Tim Naftali couldn't get Malek to repeat his criticisms on camera:

Malek comes across better to me in what he told Woodward in 1988 than in Ben Stein’s “Leave Fred Malek alone” column in 2010 (shades of “Leave Britney Alone”) or in the oral history interview he later gave [to Naftali] on the BLS matter. (I’ve described Malek’s stance in the latter as “no harm, no foul.”) Yet Malek had more at stake, as he was being considered in 1988 for chairman of the Republican National Committee.

According to an on-line catalog at nixonlibrary.gov, Malek's interview with Naftali is among those to be included the new Nixon library Watergate exhibit. It also features

convicted perjurer Dwight Chapin's dramatic charge that Nixon was present when Chapin (right) was ordered to set up a dirty tricks operation for the 1972 presidential campaign.

So far, the new exhibit at the federal Nixon library has evidently been blocked by friends and former White House colleagues of Malek and Chapin who now control Nixon's foundation.
By Fr. John at 1:09 PM

Fascinating! If I saw your commentary in The Washington Times, I've forgotten it. At that point, I still read the newspaper daily. These days, I look at it when my Mom points out something to me to read. I'm afraid I largely stopped reading the WT after it went after Acting Archivist Trudy Peterson, a friend of mine, in 1994. Needless to say, I interpreted her view of the Presidential Records Act.

I checked Nexis but couldn't find your rebuttal to Woodward in 1988. I wasn't sure what search terms to use so I tried a few variations.) Unfortuantely, the Washington Times's online archives cuts off after 1990.

Makes sense tha we would have been looking at the issues quite differently. I especially followed what was going on with the Haldeman meeting notes as they most closely indicated what was on the tapes of his conversations with Nixon. Obviously, I had a stake in what happened to Nixon's objections to the release of portions of the H notes. That's why I went to NARA and copied the Nixon withdrawls to the Haldeman notes around the time Stanley Kutler filed his tapes lawsuit.

BTW, it looks as if NARA did eventually release the September 8, 1971 Malek memo that Woodward noted was withheld at Nixon's request. I added an addendum (actually two) to my blog essay this evening. Thanks so much for linking to it!

BTW, I think Malek came off looking better in 1988 because we hadn't yet entered the age where everything is someone else's fault. (Sarah Palin is a master of that, in my view.) If only political punidts understood how much that goes against the way we ordinary people conduct ourselves on the job and how much we yearn to see signs of accountability, moral courage, and a moral compass in public life! No wonder so many people are Independents, unaffiliated with any party. In my case, the disconnect between how I think most people handle themselves on the job and with their families and friends and the way political discourse flows these days has a lot to do with it.

Thanks, MK. I looked for the WT article, too, but couldn't find it. In the files someplace.