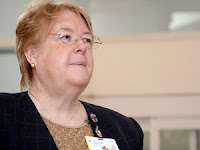 Last week, Arizona's Roman Catholic bishop fired St. Joseph's Hospital in Phoenix and said that a nun and other Catholics on the hospital's ethics committee had excommunicated themselves by permitting an abortion to save the life of a mother. Speaking up for the church (but neglecting to mention that the mother's life was at stake), Lisa Fabrizio writes:

Most folks, and indeed many Catholics who have not been properly catechized, simply do not understand the Faith. They don't understand, for example, that excommunication is far from being a tool to punish and permanently separate Catholics from the Church, but an act of charity aimed at getting the person to recognize their error and return to a faithful reception of the sacraments; most often accomplished simply by making a sincere sacramental confession and receiving absolution.

If that's the case, then Sister Margaret (not Mary, as Fabrizio writes) could, through confession, acknowledge the profound moral difficulty of the dilemma she faced and receive absolution. I understand there are those who would have no hesitation acting as she did. God blesses them in their certitude the same as God blesses those who agonize. It takes all kinds.
By Fr. John at 10:26 AM

The Inquisition was marketed as charitable work too, designed to help "relapsed" Jewish conversos. "Plus ca change, plus ca la meme chose."