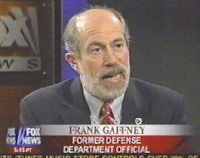 Frank Gaffney (who actually held power in the Reagan administration) says the president has been brainwashed by Muslims:

On Hannity last night, Gaffney argued that "the Obama Administration's policies are being viewed through, and actually articulated and implemented through influence operations that the Muslim Brotherhood itself is running in our own country."

"You cannot possibly get your strategy right, you cannot execute it effectively if you don't know that the enemy is actually giving you advice on how to proceed," he said.

In the same interview, Gaffney says he'd met that day with some conservative leaders who also seem to be under secret Muslim influence, which he was able to discern, evidently, from their lack of interest in his views. Hannity agrees that's a scandal deserving full attention in a future broadcast.

And there's more: Elsewhere Gaffney said that three top U.S. officials, including the director of homeland security, are "questionable people who are sympathetic to the program of the stealth jihadists who have influence with the United States government."

And you get this at no extra charge:

Right-wing author Dinesh D'Souza, who wrote a book called "The Roots of Obama's Rage," told Newsmax TV yesterday that "for Obama, America is viewed as a neocolonial power occupying Iraq and Afghanistan," so "from his point of view he sees the Muslims who are fighting against America, as in a sense, freedom fighters."

He continued: "This gives Obama a somewhat romantic view of Islamic radicals. So he might not think the Muslim Brotherhood is a problem, because he might think, 'well, look, these are the good guys trying to liberate Egypt from this horrible dictator who is supported by us, the rogue nation, the United States.'"

I should disclose that all these reports come from "Talking Points Memo," a left-leaning web site that may also be under Muslim discipline. Me, too, so far as you know.
By Fr. John at 10:08 PM