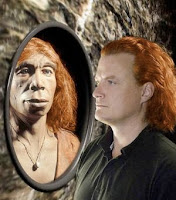 You don't have to be a Neanderthal to find intriguing correlations between scripture and modern science -- once you're willing to accept that God's normal workday runs a bit longer than ours.

New archaeological finds suggest that human migration from Africa into Mesopotamia and beyond began as long as 127,000 years ago. From DNA evidence, scientists had previously concluded that the exodus started just 60,000 years ago.

Especially interesting is the speculation about where homo sapiens may have encountered and bred with Neanderthals. Nicholas Wade writes in the New York Times:

Jebel Faya is near the Persian Gulf, which is now a shallow sea. But before 8,000 years ago, when the sea level was about 330 feet lower than today, the gulf area was a low-lying plain, with the Euphrates running through it. The region would have been an oasis that served as a refuge during dry periods. Neanderthal sites are known from central Iraq, so perhaps Neanderthals came down the river to the gulf oasis before it was inundated, making it “an interesting candidate for the place of hybridization,” [University of Birmingham archaeologist Jeffrey] Rose said.

A refuge and an oasis fed by the Euphrates, huh? As for hybridization, there's always been that odd passage in Genesis 6:1-4, just before the Noah story:

4The Nephilim were on the earth in those days—and also afterwards—when the sons of God went in to the daughters of humans, who bore children to them. These were the heroes that were of old, warriors of renown.

Wikipedia says Neanderthals were a little smaller but built more robustly than homo sapiens. What if thanks to the robustness of oral tradition, stories of their heroic exploits in northern European climes reached all the way to the compilers of Torah?
By Fr. John at 9:32 AM