This Official's Waffling, But He's Not Chicken 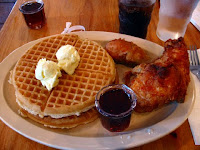 At the LA Times, Sandy Banks and a thoughtful university official speak up for the well-meaning Filipino chef at UC Irvine who was harshly criticized by angry students for serving chickens and waffles on Dr. King's day:

The culprit in this culinary blunder wasn't some "white chef who is a redneck from Mississippi or somewhere," said Vice Chancellor of Student Affairs Thomas Parham, who happens to be black.

He's a Filipino chef, who took his cue from black students "when he wanted to do something sensitive culturally" for the King holiday menu. Chicken was the meat of the day.

He asked black students for advice, and they suggested the chicken and waffles combo.

"This is a guy who takes great pride in creating 'comfort food' for the students," Parham said. "Somebody who was really trying to do something nice, that was perceived differently by a small group of people.

"No racist intent, nothing hostile about it. ... But people who jumped to faulty conclusions without considering the context and intentions."