For All The Relocated Saints 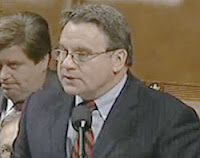 Here's another of those stories about hallowed ground. In May, according to Rep. Chris Smith (R-N.J.), 82-year-old Mary Tan's funeral in Da Nang, Vietnam turned bloody. On Aug. 18, he told the House's human rights commission:

Vietnamese authorities and riot police disrupted that sad and solemn occasion, shooting tear gas and rubber bullets into the crowd, beating mourners with batons and electric rods. More than 100 were injured, dozens were arrested, and several remain in custody and have reportedly been severely beaten and tortured. At least two innocent people have been murdered by the Vietnamese police.

Mary's mourners were trying to bury her in the Roman Catholic parish cemetery in Con Dau village, which the communist government has ordered closed. It denies attacking the funeral procession but doesn't deny preventing Mary's family from burying her. According to one report, 59 people were arrested.

I first learned about the incident from the Aug. 20 Viet Nam News, an English-language daily published by the government. (A St. John's friend travels widely in Asia and always brings newspapers home.) It carries the headline "U.S. Congressman's claims of attacks in Viet Nam refuted" and for good measure pummels Rep. Smith with "totally fabricated," "sheer fabrications," and "smear." It adds:

The article repeats a Vietnam foreign ministry statement at the time of the incident in May that it all had "nothing to do with religion." What's really happening, you see, is that local Roman Catholics refuse to acknowledge the state's superior insights about the best use of prime real estate. Why worry about those resting below when officials have big ideas for those remaining above? The Viet Nam News reveals:

Con Dau Cemetery is to be relocated as part of Da Nang's widely publicized new residential area development scheme. The city is currently providing compensation for the site clearance work to local residents and the cemetery is no longer available for use.

Obviously the mourners had just failed to keep up with news reports.

That's the way an efficiently-run government with a Religion Board handles these disagreements. It also helps to have a populace whose members are humble enough to admit their errors. The News refers to allegations that people were detained but never quite says they weren't. There do seem to have been some heart-to-hearts among officials and those involved, because the state organ also secretes this:

Some...people admitted repentantly later that they had incited the deceased woman's family to attack the police during her funeral....[A woman] was one of those lured to join the extremist group, but is now sorry for getting involved. She said: "I see I had been doing wrong."

My takeaway: Beware when someone says, "This isn't about freedom of religion."
By Fr. John at 4:34 PM