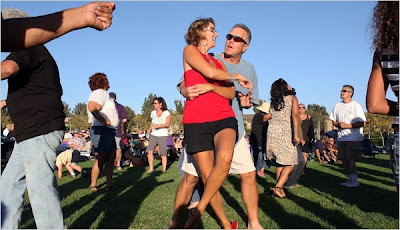 Photo by Monica Almeida/New York Times
Adam Nagourney's article in the New York Times about demographic changes and their political impact in Orange County, California stresses deepening ethnic diversity and a decline in GOP registration. The first odd thing about the article is its photo of white people behaving awkwardly at a blues festival in Irvine, which fails to illustrate the new ethnic reality nor indeed anything about politics.

Odder still is the headline: "Orange County Is No Longer Nixon Country." That's really old news. Since the presidential election of 1980, it's been Reagan country, in recognition of the insurgent who had battled Nixon for the nomination in 1968, savaged Nixon's foreign policy co-architect Henry Kissinger, and set the stage for winning the presidency by running a bruising primary campaign against Nixon's successor, Gerald Ford, in 1976.

For years the big Orange has been Reagan red in a blue state, with Yorba Linda showing about nine acres of purple. When I was director of the Nixon library foundation from 1990 to 2009, doctrinaire local conservatives called me out for such Nixon policies as wages and price controls and the abandonment of the gold standard (for which Jack Kemp genially denounced me) and the creation of the EPA. The former editor of the Orange County Register's libertarian-leaning editorial page, Ken Grubbs, once told me that my library predecessor, ex-Nixon aide Hugh Hewitt, was a "heterodox conservative." What the heresy was, he didn't say. But influential Orange County Reaganites could rattle off an endless list of Nixonian detours from the Way.

You could say Orange County was episodically Nixon country in 1960, 1968, and 1972, when it went for the Yorba Lindan for president. But the conservative vs. centrist GOP divide was evident even then. In 1962, some relatively moderate Republicans such as the late Arnold Beckman and Bob Beaver banded together to create the Lincoln Club, which, Beaver told me during long conversations in his Fullerton family room, had as its mission "to get the crazies under control" and promote Republican candidates who could win general elections. In Beaver's view, the crazy-in-chief was the late Joe Shell, who called liberals socialists (sound familiar?) and battled Nixon for the GOP nomination to run for governor in 1962. Shell said it was the other way around, that Nixon was the race's richard-come-lately. His partisans argued that his impact on Nixon's November loss was overrated. Be that as it may, Nixon always believed Shell had hurt him. He was a founding Lincoln Club member and kept up his dues.

But by the 1990s, the Lincolnites were firmly ensconced in Reagan country, where they remain, and then some. The club's Sept. 2 speaker is former Rep. Dick Armey, chair of FreedomWorks, which stirs plenty of sugar into the Tea Party. As the Lincoln Club turned right, some local moderates created a competing organization, the New Majority, that abhorred "litmus tests" (as in Supreme Court nominees' positions on abortion) and what it called the exclusion of women and minorities. One of the group's key founders told me, "We got tired of our wives complaining about the pro-life movement's total dominance of the Republican Party." Of course they wanted winning candidates who might lower their taxes, too. With the U.S. right now tilting libertarian as opposed to Falwellian, the New Majority may have lost some of its motivation. The organization's anemic Orange County web page features an address by that promoter of multiple family values himself, Newt Gingrich, but it's three years old.

So there's no doubt that the Orange County GOP has left Nixon behind. It happened 30 years ago. But the tendency of our community as a whole is firmly in the direction of the broad, centrist terrain he inhabited as a policymaker and tactician. Yes, Orange County's changing. But the road to Obama country, if the OC ever makes it that far, still passes through Yorba Linda.
By Fr. John at 4:52 PM

An excellent analysis, so good, I'm bookmarking it! I really think you've nailed it regarding OC, but then, you would know. Philip Zelikow once said at an historians' conference that government history written from outside often lacks the view from the helicopter level, that it is written from the height of an airplane far up in the sky. That you were able to provide a better analysis than the reporter, well known as his is, shows that this the case with some news stories, too. Well done.

Made my day, MK. As I wrote to the reporter (via the NYT web site; who knows how many messages he gets and whether he'll even see mine?), my quibble wasn't with the soundness of his reporting but the editor at the copy desk (do they still have copy desks?) who wrote the "Nixon country" headline. As you know better than I, lumping Nixon with the conservative movement is a common though ironic error.

I remember the time I met Philip and first met Tim Naftali. They were running the Miller Center's tapes project at the University of Virginia, and they invited me to visit. I'd been amazed by their carefully annotated transcripts of Kennedy tapes and hoped (still hope) that something that good might be done with Nixon's. It's one of the reasons I recommended Tim to AW as the first Nixon library director; Dr. W said the same thought had occurred to him.