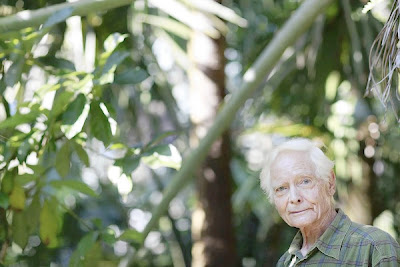 Photo by Tom Sewell/LA Times
Our very green sprout of an incoming U.S. poet laureate, M. W. Merwin, interviewed at his home in Maui by Dean Kuipers, discusses the ecology of the imagination:

Merwin spends his afternoons in the muck of the streambed, and when his famously elliptical poetry arrives, he jots it on an envelope or in a spiral notebook.

"I've never believed that the imagination, the thing that made poems, is separate from the rest of life at all. It's a part of it," Merwin says. "But we have a tradition as a society that is saying the rest of life is there purely for us to exploit without any concern about the consequences of it. It's very short-term and in my view it's suicidal."