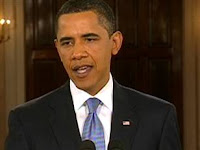 The New York Times this morning, in an article about Glenn Beck's Lincoln Memorial rally:

[Sarah Palin] said she was asked not to focus on politics but did say, in a veiled reference to Mr. Obama, “We must not fundamentally transform America as some would want; we must restore America and restore her honor.”

Veiled? Not really. The Times also reported this morning in an article about President Obama as commander in chief:

Where George W. Bush saw the conflicts in Iraq and Afghanistan as his central mission and opportunities to transform critical regions, Mr. Obama sees them as “problems that need managing,” as one adviser put it, while he pursues his mission of transforming America.

The second article, carefully reported by Peter Baker, brings to mind President Johnson's error of fighting the Vietnam war "on the the political cheap," as Norman Podhoretz famously said, because he didn't want it to sap the energy of his own ambitious and transformative domestic initiatives. His misjudgment cost him his presidency and helped deliver a poorly conceived and conducted war to Richard Nixon's doorstep. While Vietnam was a much larger commitment, Obama runs a comparable risk by trying to keep Iraq and now Afghanistan from consuming too much of his and voters' attention. For one thing, as Baker makes clear, his approach has contributed to the military's skepticism about their commander in chief:

The schisms among his team...are born in part out of uncertainty about his true commitment. His reticence to talk much publicly about the wars may owe to the political costs of alienating his base as well as the demands of other issues. Senior Pentagon and military officials said they understood that he presided over a troubled economy, but noted that he was not losing 30 American soldiers a month on Wall Street.

Obama's understandable and perhaps justifiable ambivalence about the the wisdom of continuing and expanding the Afghanistan war, so abundantly on display during last autumn's agonizing reappraisal, may persist. And yet Obama insists not. This part of Baker's article is riveting, because it reveals our sometimes stoic-seeming president's humanity as well as his Johnsonesque unwillingness to choose between guns and butter:

Last year, he flew to Dover Air Force Base in Delaware to greet soldiers’ coffins. During a later meeting with advisers, Mr. Obama expressed irritation at doubters of his commitment. “If I didn’t think this was something worth doing,” he said, “one trip to Dover would be enough to cause me to bring every soldier home. O.K.?”