On The Temple Mount, Dig Up Or Shut Up 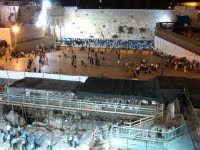 Israelis and Palestinians have collaborated, uneasily, on an anthology of articles about the Temple Mount in Jerusalem. A New York Times article about the project contains this objectionable paragraph:

The lack of archaeological evidence of the ancient temples has led many Palestinians to deny any real Jewish attachment or claim to the plateau.

Yikes. Where was the copy desk on that one? Imagine such a sentence about the Nazi gas chambers. Such sentences have been written, but not, thankfully, in the Times.

As a matter of fact, Holocaust- and Temple-denial are distant cousins. Radical Palestinians deny the existence of the First and Second Temples not because they have studied archaeology but as part a political mindset that tries to will Jews out of existence in Jerusalem. Their opposite numbers among hyper-orthodox Jews so devalue Islam's claim on the Holy City that they want to bulldoze the 1300-year-old Muslim holy sites -- which, as a matter of fact, you'd have to do before bringing archaeology into the argument, since most of the evidence of the Jewish temples would lie beneath existing structures. Palestinians who say it's not there should dig up or shut up.
By Fr. John at 1:12 PM