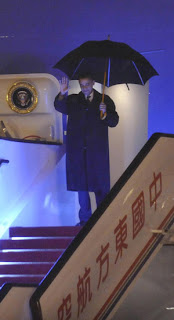 Two times I've felt really old this week: Telling musically sophisticated young people about Levon Helm's Midnight Ramble and realizing that they've never heard of him or the Band, and seeing a smiling, unconcerned President Obama get off Air Force One today in Shanghai carrying an umbrella.

I wasn't alive in 1938 (I promise) when British Prime Minister Neville Chamberlain signed the infamous Munich treaty with Adolf Hitler, conceding the Sudetenland to the Nazis and creating the modern paradigm for appeasement of an implacably aggressive dictator. But since Chamberlain was famous for carrying an umbrella, especially at the airport ceremony where he announced his deal with the devil, for as long as I can remember Western diplomats would rather get wet than carry one.

Careful research (Googling various Presidents and "umbrella") reveals that there's a dispensation for Presidents who have aides hold umbrellas for them. George W. Bush also had this mishap in Russia, where President Putin was at least displaying umbrella parity (although 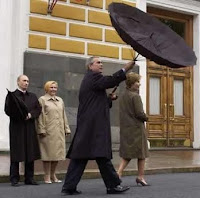 you notice he's not actually using his, which speaks well of his prudence in front of the cameras).

Perhaps it's seeing a bumbershoot-bearing Obama at an airport in China that touches an aging nerve. I'm not saying that he is an appeaser or the communist Chinese are comparable to the Nazis. Still, if he was going to do his bit to end this old superstition, he might have chosen a moment other than his arrival in an authoritarian country whose leaders control $1 trillion in Treasury bonds, want to jettison the dollar as the world's benchmark currency, and no doubt plan to use their economic leverage to pressure him on Taiwan and other issues.
By Fr. John at 4:52 PM

Bad enough, but very subtle compared to a waist-level bow to the Emperor of Japan.

Oh oh. He bowed to the King of Saudi Arabia, too.

I wonder how other Presidents have dealt with the emperor, king, and queen protocol. One doesn't want to be rude nor, on the other hand, appear subservient.

When MacArthur and Hirohito met at the U.S. Embassy in Tokyo after WW II, the image was strikingly different.