Prejean Betwixt And Between 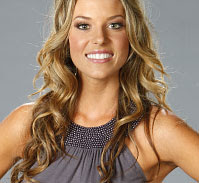 Rebecca Hagelin on the perils of being Carrie Prejean:

Carrie's book, "Still Standing," reveals a courageous woman whose Christian faith is still in its infancy. She was thrust into the national spotlight and all too quickly became a heroine for those who are sick and tired of Hollywood and the thought police. Unable to yet see the disconnect between her desire to be a "Victoria's Secret Angel" and the biblical morality she professes, Carrie is painfully discovering truth as she goes. Eager to support a young woman so viciously attacked, many supporters also missed the disparity between the sexy image Carrie loves to be and the virtuous woman she seems to want to become. As Carrie matures and becomes more sensitive to which behaviors reflect her faith and which ones tarnish it, she is learning the difference under glaring lights, scowling faces and an unforgiving media.