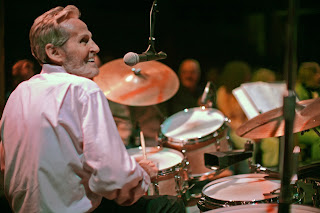 Levon Helm patted Gary and me on the knee when he arrived on stage for his set last night and patted me on the back when he left. Such incarnational moments are surely the stuff of pilgrimages. After he'd given us a big smile, I was so transfigured that I couldn't have cared less about anything else that might have happened. But as a matter of fact, the Band's legendary singer and drummer barely opened his mouth during his two and a half-hour concert last night in his Woodstock studio. A throat cancer survivor, he's still recovering from another scare last summer, when a non-cancerous lesion was removed from his throat.

While he's not yet singing as he works with his vocal coach to get back in shape, he's drumming as powerfully as ever. He powered his 12-piece show band from the right end of the stage, counting four by standing, waving his drumsticks in the air, and mouthing the words. There were plenty of lead vocalists to take up the slack, including his daughter Amy, Teresa Williams and her husband, guitarist Larry Campbell (storied performers in their own right), and, sitting in last night, roadhouse pianist David Keyes, who got to sing this classic Robbie Robertson lyric on "Across The Great Divide":

Standing by your window in pain
A pistol in your hand
And I beg you, dear Molly girl
Try and understand your man the best you can...
Now Molly dear, don't ya shed a tear
Your time will surely come
You'll feed your man chicken every Sunday
Now tell me, hon, whatcha done with the gun?

Helm and his band performed five more Band songs -- "Long Black Veil," a country standard which appeared on their "Music From Big Pink," plus "The Shape I'm In," "It Makes No Difference," "Chest Fever," and "The Weight." Songwriter and guitarist Robertson wasn't there, and Rick Danko and Richard Manuel, the group's two best voices besides Helm, died early. All this Band music, but no Band voices? Nobody cared. Nobody cares if it isn't John Wesley singing the hymns he wrote, either.

Robertson is said to have been unappreciative of the Helm-Danko-Manuel-Garth Hudson iterations of the Band that performed without him in the 1980-90s. I guess I can't blame him in view of the fairly showy "goodbye to the road" the Band paid in the film "The Last Waltz."

Still, I hope Robertson brings his famous Fender to the Midnight Ramble one time to see how the congregation is doing with his hymns, the classic songs that have entered the canon of American New Orleans-influenced R&B songwriting.

In addition to Band songs, we heard Delta peaches such as Dr. John's "Such A Night," the boisterous "All On A Mardi Gras Day," and "Do Right Woman, Do Right Man." The Ramble was in Woodstock without being especially redolent of the Woodstock festival, which was more famous for the Who and Jimi Hendrix than for proto-roots music such as the Band's, whose members looked like Mennonites, not acid rockers. The Band played the festival but didn't especially enjoy it. Nor did a certain other Americana band from San Francisco. Bad weather during their set killed the Grateful Dead's spotlights, so nobody saw them. Literally. They said they'd never played worse.

Appropriately enough, Helm's ensemble has its own links to the greater Dead family, Williams and Campbell having recently toured with Dead bassist Phil Lesh. We heard two Dead songs last night: "Tennessee Jed," which Helm recorded on his new album "Electric Dirt," and the Robert Hunter-Jerry Garcia collaboration "Attics Of My Life." Here the evening waxed from joyful to sublime, with Williams, Amy Helm, and Campbell singing Hunter's gorgeous lyrics, as the Dead themselves did on their album "American Beauty," in luminous harmony:

Oh regret, oh grace -- oh, baby boomers! We listened in rapt silence to that aching old song, we men and women of a certain age huddled together in a cozy barn, mostly in our fifties and sixties, though there were a few younger people who'd said they learned about the music from their parents. Welco 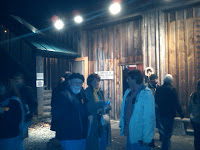 med with an easy hospitality by Team Levon, which had lit the muddy parking lot with fragrant stove fires and invited us to bring dishes for a common buffet table, we felt like we were going over to an old friend's house. We sipped beer and wine from red plastic cups they'd provided (we were asked to keep the liquor bottles in our cars) and traded stories about concerts we'd seen, albums we'd loved, sights we'd seen around town. Except in church, which comes with a common vocabulary just like rock and roll, I've rarely bonded so easily with strangers. It felt like going to a show when we were 19.

But we weren't 19. Most of our children won't see 19 again. It might just have been a nostalgia trip, but as one of the passengers, I'm looking for a better word than that. It had something to do with the curtain beginning to come down on a storied if self-absorbed generation and trying to savor and honor p

eople and things and memories we love, trying to discern what's really precious and then find the words to explain it.

One of the things I love is the Band's live version of the Motown song "Don't Do It," recorded at the Academy of Music in New York City on New Year's Eve in 1971. Levon Helm sings lead. It's lean, sharp as an icicle, almost explosively powerful. That long-ago night in New York was the first time the Band had worked with a horn section. Howard Johnson, who'd played with Charles Mingus and later led the Saturday Night Live band, played tuba and baritone sax. The horns helped make "Don't Do It" a masterpiece. Near the end, Helm and the late Rick Danko take this line as Helm plays a complicated drum pattern which you're amazed he can hold together while singing: "My biggest mistake was loving you too much." Then Johnson and the rest of the horns come back in with a mighty roar.

I'd be surprised if I've heard the song fewer than 1,000 times in the course of nearly 40 years. If I could have just one song, I'd be content with "Don't Do It." As it happened, Howard Johnson also anchored the horn section last night at the Midnight Ramble. After the show, he walked out behind Helm, and I touched him on the shoulder and said, "Thank you. God bless you." He smiled and said, "Thank you." Perhaps presumptuous of me, definitely gracious of him. I felt like I was thanking him for all the music I'd ever loved.
By Fr. John at 10:00 PM