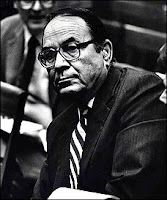 Jack Miller -- mob-prosecuting veteran of the Kennedy and Johnson administrations and a wood-chopping, brush-clearing lion of Washington -- died on Saturday at the age of 85. Richard Nixon hired him after his resignation to deal with the Ford pardon and the National Archives. Gracious and courtly, he and his law partner, Stan Mortenson, made a practice of visiting the former President every year at Christmastime for dinner and RN-mixed martinis.

Jack was my attorney, too, when I served as an executor of the Nixon estate after his death in 1994. Jack, Stan, and their colleague Scott Nelson (who now works for Ralph Nader's Public Citizen) helped me figure out how to settle one lawsuit related to the Nixon White House materials and try another in federal court.

Give rest, O Christ, to your servant with your saints, where sorrow and pain are no more, neither sighing, but life everlasting.
By Fr. John at 7:40 PM

“Jack” Miller may have his admirers but I am not among them. I cannot describe him as exemplary because the tactics used in defense of Richard Nixon in litigating access to the Nixon tapes resulted in short term gains but long term damage. The Nixon Presidential Library and the Foundation still grapple with some of that damage and may for a long time to come yet. Had Miller, Cassidy, Larocca & Lewin used somewhat different tactics, especially when Nixon intervened in Kutler v. Wilson, that would not be the case. And, although one person switching to Independent is much less important than the baggage corporate entities and institutions must trail, had lawyers acted differently, I might have remained the Republican that I was from 1972 to 1989 – or at least not left the party as early as I did.

It was the conduct of Nixon’s lawyers and the Justice Department’s lawyers in Kutler v. Wilson that taught me the extent to which power serves power. And served as a cautionary note that in situations where men can take the high road or the low, too often they will take the low. And that a former President’s lawyer will do his utmost to preserve a powerful man’s reputation, even if it means doing harm to the reputations of much less powerful but honorable civil servants. Just collateral damage. To this day, I remain uncertain about what will happen to the historical materials at the Nixon Presidential Library and whether their handling will be as honorable as I believe it should be. That this is so has much to do with Jack Miller and Miller, Cassidy, Larocca & Lewin.

Thanks for posting this reply, MK. Blessings.